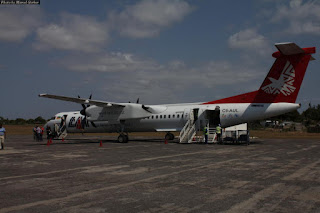 LAM (Linhas Aéreas de Moçambique) have got a small aircraft with the back of the left propeller support slightly burnt. Can't see the right one, so I cannot tell in what kind of state it is. But maybe that's just how it's supposed to be.

I don't know what kind of craft it was, I was about to take off in. I was sitting in seat 14A which is located under the left wing. The craft is not even half full. As expected, the crew speaks mostly Portuguese, but the captain always says his messages in English after having said them in Portuguese. Although the English version mostly was way shorter than the Portuguese one.

Read more »
established by chmger at 11:59 No comments:


CouchSurfing, ever the best way to go discover a new place. You get right to the point within a few hours of meeting your host. I didn't see much yet, but knowing a bit how it works down here in SA (South Africa), I feel quite good while recognizing things that are the same around Namibia and in Cape Town.
Robert fetched me at the airport. His heavy Afrikaans accent in English takes me some time to get accustomed to. His first wife passed away, and he's now been married to Laurentia for 4 or 5 years.

Read more »
established by chmger at 11:05 No comments:

Read more »
established by chmger at 22:44 No comments: