Pat and Tom invited me over to the village where they are working as Peace Corps volunteers. We took a dala dala or minibus taxi. It was one of the medium sized ones. About numerous stops to fill it up with passengers and about an hour later, we arrived on top of a hill where we had to get out. Simambwe is located on the main road between Songwe border (from where I came crossing over from Malawi) and Mbeya.

Read more »
established by chmger at 18:53 No comments:


I asked Elious from Ecolodge if he could organize my motorcycle trip back to Monkey Bay. He later told me it was organized, so I didn't give too much thought about it, although I knew I had to be in Monkey Bay at latest at six. For security I took the driver's phone number. The next morning I woke up at 4.30 and was ready at quarter to five. At that time I called the driver to see if he was up and running, but got the operator's standard message which says the correspondent isn't available. So I waited and called again around five. He then answered and said he was on his way, but arrived only about 20 minutes later. When asked why he was late, he answered he was fixing the tyre up to 8 the previous night. At 5.30 we finally left for Monkey Bay. I wanted to leave at five in order to be comfortable on time and not to have to rush as the road wasn't all good and full of potholes. But that went to the monkeys. We sped along on the tar road and I was even more scared than on the way in. We got to Monkey Bay in one piece just in time for me to catch the bus. I only lost my bottle of water on the way. Small price to pay.

Read more »
established by chmger at 18:31 No comments:

After two days of sitting here like a duck on a stone, I decided it was time for me to do something again. The loose stool having lasted less than two days, I remain only with the great fatigue and the weird skin feeling. The fatigue isn't better if I do nothing and sleep. Actually, doing something sparks my brain and I feel less tired while I'm at it.

First things first, I organized my lift to Monkey Bay for the next morning. A motorbike taxi should pick me up at five in the morning. Although this remains to be confirmed. From Monkey Bay I will take the bus to Lilongwe, but only up to Salima, where I probably will have to change and take another one for Mzuzu (pronounced Moozoozoo).

Read more »
established by chmger at 19:01 No comments:


About five days after arriving in Mufasa Rustic Backpackers in Monkey Bay I left it for Cape McLear. Marc, the Spanish guy who travels from Alexandria to Cape Town on a Yamaha Ténéré 600, went there a day before and came back to say he got a good deal with a place there with diving and kayaking included. So I decided to join him there for the dives the next day.

QB the current manager at Mufasa and José the night guard helped me out to get a transport to Cape McLear. They told me the best was to take one of the motorbike taxis. I showed them my big bags and told them it will probably be too much luggage, but they said no it's going to be fine, they have space to pack the bags upon. When the bike came, I saw the small space, and wondered how the driver, me, my big Travel Trekker, my backpack and my camera bag were going to fit onto it. Unfortunately nobody took a picture, because it was a sight. The helmet obviously didn't fit me and I would probably be better off without it in case of an accident.

Read more »
established by chmger at 13:59 No comments:

Africa is beautiful. There are many black people here. They are nice. But they want money.


established by chmger at 20:08 No comments:

Email ThisBlogThis!Share to TwitterShare to FacebookShare to Pinterest
Labels: LANG:EN

I woke up early, around 5 am. I tried to sleep some more until my wake-up call at 5.40 but I couldn't. So I finally got up around 5.20. It didn't take long to prepare myself and my stuff. A quick brushing of my teeth, closing my bags and taking everything out of the dorm. The taxi driver was already waiting outside and we promptly left for the bus station. At some point I realized I had forgotten my toasting bread in the reception area of the backpackers while leaving. Too late.

The confusion was total when I wanted to organize a taxi for the taxi rank or the border in the morning. But first things first. The “planning the next day” way of traveling has its downsides when you forget to think ahead in case some buses only drive on certain days. So it happened that I got back from South Luangwa on a Wednesday with the bus running on Wednesday. No need to say it was gone when I got there to check for the next day. The next bus would only be on Sunday. So I would have to travel by shared taxis and minibus combis. 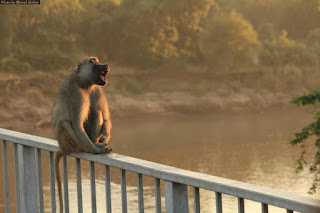 Chipata, with its small town atmosphere and its strong Muslim and Indian influences, looks and feels like an old African town from the last century. Most shops are owned by Arabs or Indians and close early around five. If you turn off the Great East Road before arriving to the shopping malls, you will find the modern world only after looking well. Well, you will still see mobile phones and other electronics for sale, but the town itself doesn't look modern at all. There is no ATM or supermarket in Down Town Chipata.

Read more »
established by chmger at 16:08 No comments:

That Friday morning I finally checked out of Kalulu again and said goodbye to Mark and Tina and others. Tim would be leaving for Ethiopia and then Vietnam where he is teaching English the same day. Tina is a girl working at the backpackers doing all sorts of cleaning tasks. She is really nice and always wears a smile on her face. I had arranged a taxi to take me to Leopards Hill Road when I arrived in Lusaka two days earlier, but the taxi driver's phone was offline for the last day and I couldn't contact him. He didn't show up either, so I eventually checked outside the doors of the backpackers to see if there was a taxi. As there are always some customers needing a taxi, there is mostly one waiting outside. He said he would drive me to Crossroads for KR 50. I told him it was further and offered to pay him KR 80, as much as I had negotiated with the first taxi driver. It's the first time I actually put a price up and not down.