The plan was to escape christmas and the cold. It worked for the cold, and only halfway for x-mas. Arriving in Bangkok i soon noticed that they love playing x-mas songs on speakers in various places in the streets. There was the odd x-mas tree made of some material or other. I stayed with a couchsurfer at his condo (flat/studio) for 2 days. He showed me the city and temples in it. We ate a lot, chatted a lot and drank a few beers.

After that i went north to Chiang Mai by night train where i met Nina who is traveling for half a year now. There I did a 3 days trek with two couples from Romania and 3 guys from Korea. The Korean barely talked any english. Our tour guide T is a very funny bloke. You never know when he's serious or not. On the trek we saw and washed elephants, swam in waterfalls and slept in a Lahu village on the top of a mountain. 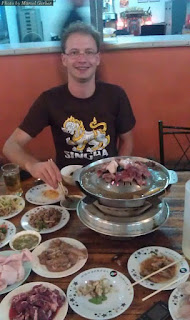 After the trek we went to a place where you can eat Thai food cooked by yourself with T. They give you some kind of round grill with coals inside. On top you grill, and on the side you make noodles and stuff that needs liquid to cook. Nina joined us later and we got really wasted. So much that we felt bad the whole day after, which was new year's eve. We barely held until the fireworks where over at new year and went to sleep.

I spent some days in and around Chiang Mai. I rented a small motorcycle with which i went to the Samoeng Forest (a national park). I met some people there too, one a German (i think he was) who lived there with his Thai wife and his two children on a farm and guesthouse he built himself. We spent a nice evening talking with him, his wife and their other guests. The next morning i spent searching for the hotsprings he told me about. As the roadsigns are mostly in Thai, i had to ask people how to get there. Which was no problem as they are really helpful. Even if they don't know they don't give up, they just ask someone else until they find someone who can help somewhat. After that i mysteriously found my way back to Samoeng (which wasn't the plan) and my battery stopped working. So i had to go strait back to Chiang Mai without turning the engine off again.

After that i spent some time with people from and around Muan Baan, the guesthouse in Moon Muang Soi 7 where i stayed. The manager of the massage salon just opposite invited me to a game of bowling the next day. After that he invited us to a Muay Thai boxing evening. We went there a bit late because we were playing cards and Kuan (the massage salon manager) didn't want us to interrupt the game to go to the boxing. So we kind of missed the whole show. Anyway, we spent a good evening with Tony, a bloke from Spain who spends his 3 months holidays in Thailand this year. He's a masseur on Majorca.

Two days of travelling took me down south to Chumphon and then Koh Tao. I spent long hours in a night train to Bangkok, then a train to Chumphon, then a night ferry to Koh Tao.

Koh Tao is the diver's paradise. I even bought my basic snorkeling equipment in order to have my adjusted mask (with prescription lenses inside) and fins and snorkel.

All the time i was greatly helped by Fong's mother whom i unfortunately didn't meet this time.
established by chmger at 18:48