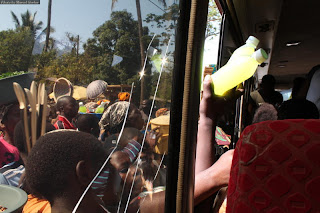 My first experience of a true local tradition was a wedding ceremony. A few days earlier, Black Jack (Franzisko by real name), who is working for a local tourism agency providing us (Tofo Scuba) with many customers, invited me to join him for a traditional wedding ceremony in his home village. He also invited Martin, a german fellow who is close to ending his six months internship with them. He arranged for us three to meet at the bus station in Tofo at 6 in the morning of that Friday. When i got there at 10 to 6, Franzisko was already sitting there waiting for me and Martin with fishes for his family.
Martin joined us a few minutes later, and the chapa followed shortly afterwards. The travel to Inhambane was an ordinary chapa squeeze ride. Franzisko let the bus driver who was to take us from Inhambane know that we were on our way so that he wouldn't leave without us. When we got there, we loaded the fish in the bus and had a comfortable seat at the back of the bus. The ride was set in a scenery of mango, papaya and coconut trees (from what i recognize). At some point we got to Inharrime where people wanted to sell us refreshments and snacks (coconut bread, nuts, and so on) through the windows. Later we arrived at our exit point in Milave. Milave is a small town on the N1 in the district of Inharrime in the province of Inhambane. There we met some of his family who waited with a car. We bought some beers for the week-end, and left part of his fish in a fridge in his friend's store. In the village there was to be no electricity. 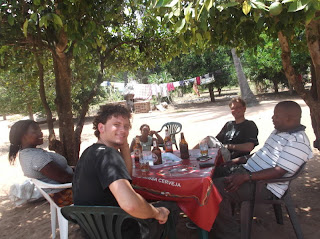 We then set of in the back of the pickup through Milave and to Munguambe where Franzisko's family resides. On the way a child saw us and shouted « Mulungus » (whites) after us, to which Martin replied a « Mulande » (black). Once their we dropped our bags and beers at Franzisko's house and went to the central location where a few brothers live. Their more of the family members were gathered and we were offered chairs to sit down on. We joined them to drink their local spirit which was served one cup at a time to each present person. The rounds went quite quickly anyway and after 3 or 4 cups i felt the alcohol's effect start. Afterwards we went back to Franzisko's home and ate fish, rice and matapa. After lunch Martin and I had a siesta after which we went back to the village where we spent the rest of the afternoon. We then headed home and had supper in the light of a pocket lamp. We went to bed quite early, knowing we'd rise close after the sun, at 5 in the morning. 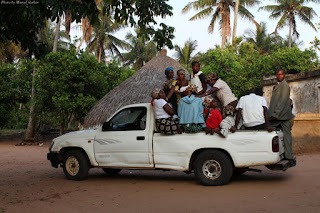 We raised at 5, had some tea and coconut bread as early breakfast. We left for the village a little later, where we then all loaded in a pickup already full of people. But we managed to get in, and stay in until we reached the bride's village about 14 km away on sand tracks. Once we got there we were presented with chairs to sit down. It was like in Franzisko's village, we were treated as guests although we are Mulungus. After a while sitting there and watching what was happening, we got some tea and bread with fruit jam for breakfast. Ladies moved about the crowd serving them cups, tea, sugar and bread.
A little while later, still before seven in the morning, Franzisko told me to come over to a house where something important was happening. A few elders from each family were gathered for an important proceeding. First there was some talk of which I didn't get a word. Then, Franzisko's father went out of the house with a chicken and slit its throat. Thereafter he went back inside and some money was given to the bride's family. Last, they started listing all the gifts brought over by Franzisko's family. An elder read out each item, another found it in the suitcase and a third one wrote it down on a piece of paper. I stayed in the house a while, taking a long video of 6 boring minutes of exchange. Franzisko would have liked the whole part on video, but that was definitely too long. After a while Franzisko came back and asked how it went, so I told him I wouldn't be able to film it all. He took me out of the house and we all went for a stroll to get some drinks at a local shop. 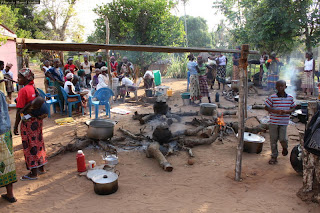 On the way to the shop, they showed us a house which, during the war, was a general's house which served as a prison as well. There were people murdered inside, we were told by one person who apparently was in the general's army at the time.
At the shop we bought 6 25cl bottles of Irish Cream, 25cl bottle of Irish Whiskey and 3 soft drinks. The price was much lower than in Tofo. We split the drinks and walked back to the gathering, being loaded in case it got boring again.
We sat down again, and waited a while, until someone told me to get over to where some singing just started. Two groups of women were sitting on mats on the ground. Between the two groups they left some space open for those who wanted to show some dance steps. I took some movie shots of the singing and dancing and sat down on a chair again for a while. Later we were told to move to another spot under a big mango tree where some people were already sitting. We brought our chairs over as well. We were waiting there talking to some people about different things for quite some time. One guy told me he was working in the mines in South Africa, by 4km depth. It was quite dangerous as a mineshaft could collapse anytime. We were comparing life subjects as it was in Mozambique and Europe. 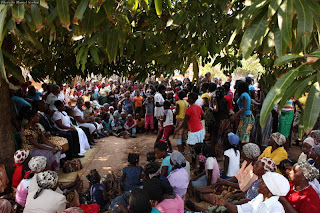 When the singing started again I rose to go over to yet another house where a group of youngsters, mostly girls, were gathered and sang and danced. I started filming again, hoping something interesting would take place. But then the singing subsided and we waited a while again. The singing started and subsided a few times, until at some point, it started for good and more people gathered in front of the house's door. The singing got louder and the excitation grew as everyone expected the bride and bridegroom to come out of the house. When they finally dared out, they were walking on mats laid out in front of them (like we do for celebrities with a red carpet) with their heads covered in a cloth to hide them from view until appropriate. They walked under the mango tree and sat down on an improvised bench made of chairs with a cloth to make it look nice.
The wedding ceremony then began and took some time. I didn't get what was said, so I proceeded with taking pictures. The lighting was quite difficult, the sun being high and harsh and the shade of the tree making high contrasts. But I managed some shots which show what happened and which aren't too bad. The bride, once married, showed her ring to the assembly. After that the families met each other, in order of close relationship with the bride and bridegroom. With Martin we went at the beginning with Franzisko and some other important people of their family. After a while it was over, and the gift distribution began : the married couple gave their suitcase full of gifts to different members of the families. 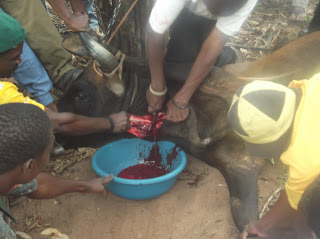 After a while some of us went under another tree a little further because we were bored. We got quite hungry and after a while they began preparing a table with plates, forks and such. We were served a first time before most anybody else. As we finished we were asked if we would like some more, which we did. We were full after the second helping, but some time after that, a girl came with plates full of food again, and we couldn't refuse it, so we ate again.
Later in the afternoon we loaded ourselves into the back of the backie again, and rolled back to our place. We went home, had some beer and food again and went to check the village to see what the program for the next day was. It came out that the bull wasn't to be slaughtered before five the next morning, so we went back to the house, Martin and me, because we didn't want to miss the bull and were quite exhausted. Franzisko had to stay a little longer to prepare the program for the next day and to write the days events down.
The next morning we rose at five again and had some tea and coconut bread at the house before leaving for the village. At the village not much was going on except some kids listening to loud music after a night of which the most spent dancing and partying. Around 8, Franzisko told me we would leave for the bus station on the N1, because i had to be back at work the next day. I said goodbye to the people and left on the back of the pickup. 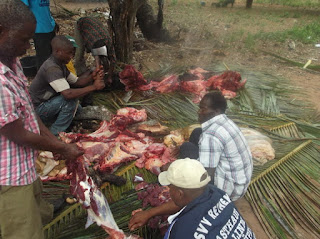 The next day I learnt that the bull had been slaughtered while Franzisko was waiting for my bus with me. Martin witnessed it and took some pictures. First they tied the bull to a tree by the neck, then tied his legs in a way to make him fall. They then started slitting its throat. The bull still lived a while and emitted gurgling sounds while he tried breathing. Blood spurted out of the arteria into bucket prepared for this. Martin got a little nauseaus and had to leave. After 2 or 3 hours he came back and the bull was now meat, cut in pieces. Later they cooked and ate every part of it. Nothing went to waste.
The journey back was quite uneventful.
established by chmger at 17:00