After two days of sitting here like a duck on a stone, I decided it was time for me to do something again. The loose stool having lasted less than two days, I remain only with the great fatigue and the weird skin feeling. The fatigue isn't better if I do nothing and sleep. Actually, doing something sparks my brain and I feel less tired while I'm at it.

First things first, I organized my lift to Monkey Bay for the next morning. A motorbike taxi should pick me up at five in the morning. Although this remains to be confirmed. From Monkey Bay I will take the bus to Lilongwe, but only up to Salima, where I probably will have to change and take another one for Mzuzu (pronounced Moozoozoo).

Next thing was to get some things for the lunch on the island. I asked where I could get some avocados, as I simply love avocados and I could just munch them up one after the other without anything else but some salt. I hadn't seen them at the stalls close by, and Watson told me there usually are some at the market. He would have sent one of the staff members, but I wanted to have a look of the market myself, so I was allowed to get the bicycle. I cycled there, quickly found some avos and wanted to buy bread. That was only sold at the “bakery” where there was no one. So I cycled back, stopping on the way to get water, eggs and cookies. I knew I could have bread at the last shop before the lodge, and I did.

When I was ready, I took the kayak that had been put on the beach for me and headed for the closest island. When I got there, I saw a boat and people looming and lunching on the rocks next to the Aquarium dive site. So I went further and around the corner to another outcrop of rocks. I quickly sat in the water with my mask and snorkel and saw plenty of fishes swimming close by around me. It was amazing. Then one of the fishes began nibbling me, so I went out and had lunch. I discovered quite a few hidden and beautiful lagoons on the other side of the island. I stopped at a few. A lot of fish eagles seem to dwell on the trees of this island, and there are tons of other birds like kingfishers as well. They are not disturbed too much by the presence of my kayak quietly sliding by. 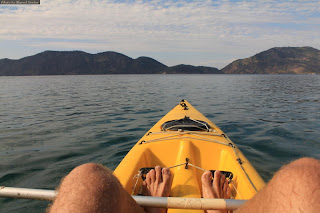 In a lagoon with amazingly blue-green water I marooned my kayak to the rocks and went out for snorkeling. I just had to sit on a rock, with the top of my head and the snorkel out of the water to see hundreds of colorful fishes swimming with me. They actually seemed to be following me. As I didn't know if there were crocodiles or hippos nearby, I didn't stay in too long. On the big slab of almost flat rock next to the lagoon, there was a bird which I approached without seeing it until I was only about three or 4 meters away. It just went on doing whatever it was doing (I don't know what that was really, probably fishing). 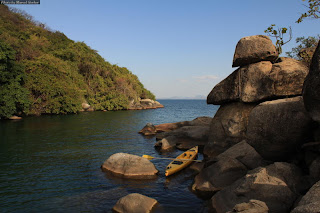 As it was risky to turn around to take my camera out of the “dry” space, I didn't take too many pictures from the water. I probably would have capsized if I tried too much. But at some point I held myself on some rocks and took it out anyway, because there was this beautiful baobab tree. It's not coming out so well on the pictures, but hey, who cares, I saw it.

When I paddled my way along the northern shore, the lake got somewhat rougher (not rough at all, but bad enough to worry me about the camera). After a few hours of this blissful paddling, I finished the circle around the island and headed back to the mainland. 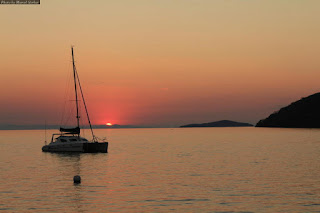 It was an amazing day, and like Marc said “better than diving”. Those people who are responsible for me not getting a gopro or other underwater camera should blame themselves for the missing underwater pictures. As you know it just was my birthday, and it would have made perfect sense.

Anyway, just kidding (or not).

When I got showered and picked up a last souvenir craft from one of the craftsmen who actually makes them in front of you if you would stay there and watch him, I went to my last sunset from this part of Lake Malawi. The view is going to change a lot from other vantage points.

See you soon.
established by chmger at 19:01