Pat and Tom invited me over to the village where they are working as Peace Corps volunteers. We took a dala dala or minibus taxi. It was one of the medium sized ones. About numerous stops to fill it up with passengers and about an hour later, we arrived on top of a hill where we had to get out. Simambwe is located on the main road between Songwe border (from where I came crossing over from Malawi) and Mbeya. 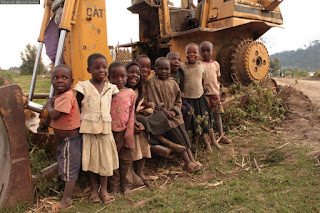 They live in a small house with a central living room and two bedrooms. The house is part of a small compound with two other houses where the family of the VEO (village executive officer) and his family lives. They are nice people who were eager to meet the guest mzungu, so they invited us for supper the same evening. With Pat and Tom we went to the local market to buy rice and a couple of other things to bring to them for the meal. Usually Pat & Tom are invited over for supper. They also told me that they are not let to wash their clothes or cook if Mama Happy or Editha see them do it. They say they don't do it properly and proceed with helping them.

Michael, being the village executive officer, which is an appointed and paid position, has lots of duties in and around the village and ten sub-villages. There is also a chairman for the village, which is an elected position. He also is Tom's local counterpart for the Peace Corps projects. He comes over to the house quite often, and has now begun a course on how to use a computer with me. It is difficult, because I have never taught anything before, and thus have no structure at all. But I try to keep it varied in folder and file manipulation, creating word processing and spreadsheet documents and so on. We presently don't go much further than that. If he is able to use a computer (not because of ability but because of availability), he will use it to prepare his committee meetings, budget plans for projects and so on.

I don't know about the altitude here, but it's quite elevated and the temperature is mostly low. Although the sun hits hard, and warms you up quite a bit. But as soon as the cold wind blows or you find yourself out of the sun, you get cold again.

The well where we take our water from has been dug out by Michael and his brother a couple of years back. They needed three days to dig it. A bucket attached to a rope is thrown in and then retrieved full of water. If your not careful about your water consumption you end up carrying a lot of water buckets out of there. 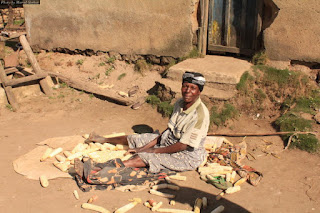 Mariam, who is Pat's local counterpart lives in a tiny mud house with mud floor. She cooks inside her house on a small fire. When she wants to cook (or make pop-corn) she uses one of the sticks to make a suitable spot for the pan which might otherwise fall in between the stones. We sat there for a while one afternoon because she invited us over. She's been a widow for a few years now, and is raising her four children alone. She's also representing her sub-village of Simambwe in the council. She guided us on one of our hikes around the hills close to the village. Walking with her through the village allowed me to get a few good shots of village life. 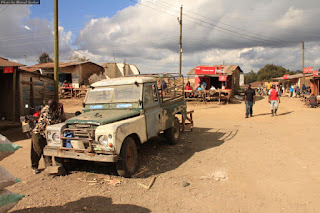 As Peace Corps counterparts Mariam and Michael both went to Dar-es-Salaam with Tom and Pat and other volunteers. There they participated in training that would help the American volunteers to cope with daily life in the field (literally). Washing clothes, making coals for the fire with cow dung, killing a chicken, etc. all is part of their training.

I'm quite happy being able to visit the village over these few days. I see it all from a different perspective than when I stay at hostels or backpackers. Everything is more difficult and takes more time to do. For example, washing clothes by hand. You have to soak them first in soap-water, then wash the clothes, then rinse them off. It's only the second time I wash my own clothes since I've left Switzerland last year. I usually pay a small price for letting someone else having the honor of doing it. 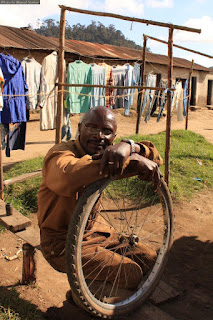 It is quite difficult to learn the language, but you have to know a few things when you come here. Otherwise you'll never get by. People don't usually speak English as they would in other countries I've visited. But then, they don't have English as an official language as do South Africa, Botswana, Zambia, Zimbabwe and Malawi. Here the official language is Kiswahili. But they also have local languages, which makes it even harder to get by. Even the greeting forms vary. When you encounter an elder person you would usually say “Shikamo” and the elder would reply with “Marahaba”, which is a form of showing respect. Doing that, kids would sometimes touch the head of the elder. Otherwise a standard greeting form is “Habari” which means “How are you?”. It's usually answered by a “Salama” (not salami) or “Nzuri” to say “I'm fine”. In local language they use another form where both actors simply use the same word for the greeting. The rest of the language is spoken like Master Yoda would speak. Put the noun before the verb and then the rest of the sentence. But careful, when you think you understand something, well you probably only have a small fraction of the language. For example, the pronouns change if you use it without anything, or with a verb. Words have different prefixes according to what the sentence is. It is a quite complicated language to learn. When I hear Pat & Tom struggle with the language, I am quite impressed because they seem to understand quite a lot and they can make themselves understood in return. They have been here for about half a year now. 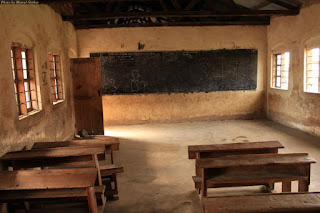 One day Tom made some cornbread. He made one for Michael's family and one for us. In the evening Mariam came to the house with another lady from the village. They had planned to be here around noon for the English lesson, but their town meeting took a lot longer than scheduled. Tom gave the two ladies some cornbread and Mariam loved it and was excited about it.


Going back home will be weird because I can get everything easily. Here I get really excited about treats when I can get some. 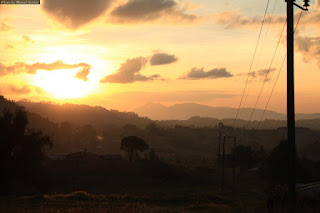