Getting there, we witnessed how they put a motorcycle on the roof of a bus. 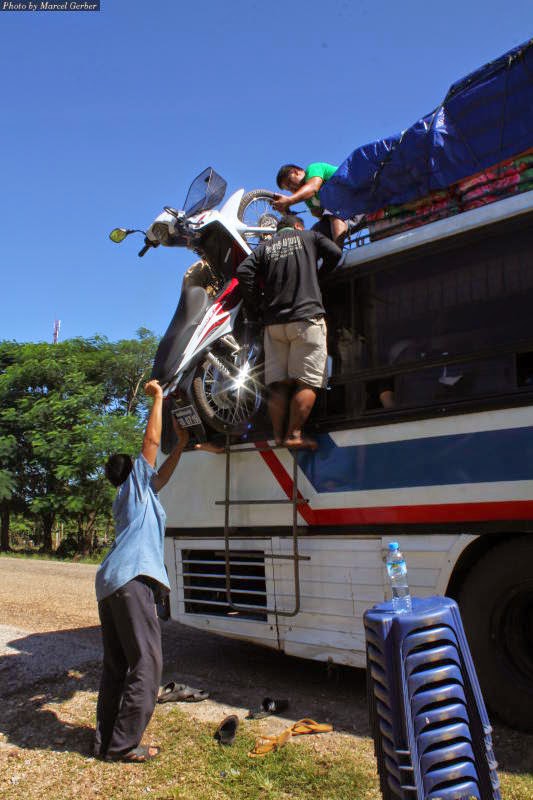 Arriving here, I said I wanted to disconnect. It was to be easy, as every information we found about the island, was that there was no constant electricity, thus no wifi and thus no internet. It was not to be so. An electric line was built some years ago. But I stayed disconnected nevertheless.

Mostly we did hanging around, lounging and relaxing. But on two occasions, I felt like doing something. I can only do nothing for so long.

One day I went to walk around Don Dhet which I completed in about two and a half hours.
The other day, I rented a bicycle for 10'000 kip (CHF 1.20) for the day. I went to the old railroad bridge that linked Don Dhet to Don Khone. This bridge had been built in the end of the 19th century. The French tried to go up the Mekong by boat, but couldn't get past the rapids of Si Phan Don. They ended up building one of the shortest railway lines on earth to carry their steamships across the rapids' islands to the upper part. For that they built this construction on the river that lifted the ships out of the water towards the train. The ships were disassembled downriver reassembled upriver. Their plan was to go to China on the Mekong. Once in China, the expedition failed due to locals who wouldn't let them pass.

On the island I could witness two of the rapids. They look quite impassable. I wouldn't even try to go downriver on those. With a steamship upriver, I don't know who could think about that.

I had to pay 25'000 kip to “visit” the island, although there were many guesthouses located there. In Switzerland or generally in Europe, if you want to look at a waterfall, river or any natural sight, you go there, and you look at it. In Laos and Thailand they like to make you pay for it.

At first, I went north, to try and find the rapids on the eastern side. I didn't find them, but found an old crooked bridge that looked quite dangerous to pass on. So I doubled back and took another road to another place. The roads are in pretty bad conditions, except for the old railway line road. This one is kept in acceptable conditions. The others are full of water filled potholes that lets your bicycle wheels go down thirty to forty centimetres into the mud.

When I was on the southern tip, where the French built there ship dock, I could take a road that went to the east side again. So I took it. The path got very narrow, to a point you could only pass one at a time, which was fine, as I was alone. I met some Germans going the other way. They told me about a bridge that was broken. I thought it could be the one I didn't cross earlier. And it was. It still looked dangerous, but I made it.

After that, being on the same path as in the morning, I tried better to have a look at the eastern rapids. I went into the forest by foot but found only a narrow water channel rushing by. Nothing fancy. On the way out there, I saw a branch dangerously close to my right eye. The last thing my right eye saw. Before I managed to open it again. I think it's pretty hurt. I thought there was something in my eye, but it's just hurt. Later I finally found the good path to go see the rapids. My eye was making it a little bit tricky.

I bought some more water and tried rinsing it out, but to no avail. So I just went back to Don Dhet and to the guesthouse. On the way back, holding my right eye closed, I managed to see a green snake eating a blue gecko. Maybe the gecko was blue because it was out of air?

Then I went back, tried to rinse it out again and finally slept like that. It felt a little better the next morning.

Thus I didn't go kayaking the following day, because that was the last we would spend here. Our two weeks visa exemption time would expire the next day, so we had to leave Laos.
established by chmger at 16:27