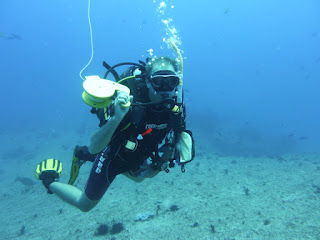 When I was still finishing my Divemaster in December in Tofo, I met these two ladies whom I now live with for a few weeks. They were in holidays in Tofo and Nelri, the daughter did her Open Water course and Deep Adventure dive. Her mother already was a diver, but was not so confident underwater. They went to Manta Reef (one of the world's most popular reefs) where there is usually close to no current. That day though, the current was quite strong and it didn't help Katryn's confidence to rise. So when she wanted to join Nelri for another deep dive on Giant's Castle, which is a drift dive, Katryn hesitated before she did. I offered her to come along on the dive so I could take care of only her. There was still enough space on the boat for me to do so, and this she accepted gladly. Afterwards she offered me to visit them in Hoedspruit, which is in the middle of Big 5 game country. Kruger Park itself is less than 40km away.

When I had to go to Nelspruit for my Mozambican visa, I saw that the countryside looked quite amazing, so I decided I had to visit the area a bit more. Once back in Mozambique, I sent Katryn an e-mail stating my intention to accept her invitation. She replied positively and even asked me if I was interested to participate in a Field Guide course which Nelri was going to start shortly. It happened that we're finally all following the course.

Katryn asked me if I wanted to be picked up in Nelspruit, and I said it was OK for me to come by minibus taxi, as Nelspruit is about 160km away from Hoedspruit. But when I got nearer to Nelspruit she organized a lift and I was glad of it. It's not really a prospect that I look forward to, to take a series of minibus taxis with all my luggage. It's quite bulky and it would be a hassle to take it out every time I would need to change taxi, as they usually only go short distances, or rarely where you want to go. I spent a night in Nelspruit in the Old Vic Travellers Inn whose owners are awesome and of which you already saw the pictures. It's a little paradise in the otherwise boring Nelspruit.

The drive and the home

I was picked up at a mall's MacDonald's in the early afternoon by two nice ladies. Wendy being the mother of Sheena, who was pregnant (Sheena, not Wendy). We drove from the Highveld down to the Lowveld through trust country. The road was quite nice and the view awesome as you will see from some pictures. The pictures are not from this trip itself though. The country just goes from mountains to flat hills, which is the lowveld. Trust country means that it is people from all over Africa who tried their luck in South Africa instead of staying in their country where they didn't have any opportunity to get somewhere in life. It is a huge area of small houses and it lies right next to Kruger National Park. Most of these people don't have a job, and some fall back to rhino poaching which, if they get the rhino's horns without getting caught, is a really lucrative business. Rhino horn sells about 55'000 USD per kilogram.

We went to their farm with view on the Blyde River Canyon, where Nelri and Katryn where already expecting our arrival. After a short hello and goodbye and view from the house (of the canyon and the river) we drove to Katryn and Nelri's place. They are living on a property which is a game farm. Its actual owner doesn't want to live here (I think the one who lived here passed away) so he entrusted the farm management to Katryn, and in exchange she can live in one of the houses with her daughter who is currently here. The house has cold water and electricity, but not everywhere. It's an old farm house probably built in the 1950's.

The property's perimeter is about 10km long and is delimited by two fences and a bend in the Blyde River. There are giraffes, zebras, impalas, wildebeests (gnus), Pumbas (warthogs) and a leopard which I've not seen yet.

Nelri has a gap year in her studies, which she is filling out with this field guide course and her divemaster she is going to start afterwards. She wanted to do it at Tofo Scuba, but unfortunately nobody replied to her e-mails which she sent in January and February when John and Nikki were away touring SA.
established by chmger at 12:44