Flying over the Lowveld and other travels 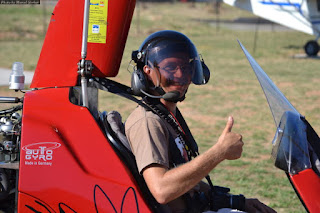 Flying over the Lowveld with this tiny aircraft called a gyrocopter was a special and amazing experience. Katryn, my hostess, got a message on her Blackberry community group conversation that one person was going to fly from Hoedspruit to Tzaneen the following morning. He was looking for a passenger because he'd rather fly with some company than alone. That's how I found myself to be responsible for hauling the whole crew out of the game farm early morning on Katryn's birthday. We left around 7.20 for the civil airfield in Hoedspruit. 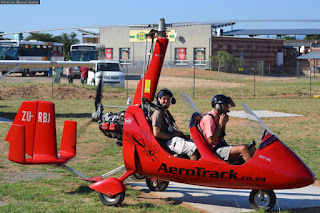 We watched Tom fly in from his place to the airfield. A gyrocopter has a rotor with blades like a helicopter and is a small open two-seater, the seats being one behind the other. We took off and kept a northerly course following the Blyde River, flying over different privately owned game farms. In the process we managed to spot some crocodiles, hippos, waterbucks and giraffes. We quickly reached the point where the green Blyde River joins the brown Oliphant's River. Tom could fly very low with his craft, and we used that to fly right above the water along the Oliphant's river. After a while the Oliphant's River changed direction and we had to keep our course towards Tzaneen, so we left the river. The landscape is mostly low hills with sometimes a little higher and steeper hills. North of the Oliphant's there were mostly mango, citrus and avocado farms. Interesting rock formations stick out of the ground and look like stone structures put there on purpose.


On towards another airstrip Tom said a friend of his was flying from Malelane to the said airfield, where we later waved at the pilot who had passed us without being seen and already landed. We then flew over the Tzaneen dam before landing on a small airstrip out of Tzaneen. We waited there in the heat for his son who got a lift from Pretoria. When they got there, I got a lift the the next shopping mall in Tzaneen. There I ate a breakfast at Wimpy's before heading towards the road to Phalaborwa where I tried my first hitchhiking experience. 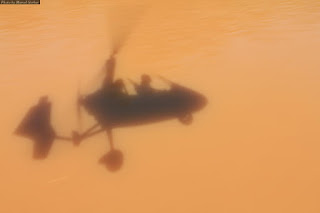 A lot of cars passed by without stopping. When one finally stopped, the driver told me and other stoppers that he would turn off the road a bit later. After what seemed a long time, a car stopped and took me and two other stoppers all the way to Phalaborwa for R 30. The two others went out a few kilometers before town, which enabled the driver to pick up a lady for the last bit. She asked me if I was coming for the Marula festival which happened over the week-end. I would have to check that out.


I didn't find any cheap accommodation by myself in the sweltering heat so I went to ask at a petrol station. They advised me to try the African Lily which was just opposite on the road, and which had budget rooms for R 150. The place looks a bit worn down, and the budget rooms actually are containers with box showers and some furniture. The managing lady was very nice and helpful, which made the overnight stay a good experience. I asked her about the Marula festival and she told me it was a government thing and that there would be street artists and concerts over the whole week-end. 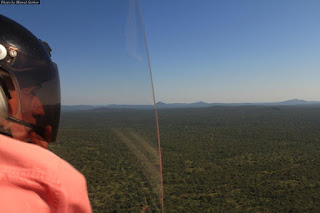 But I chose to go to the pool first, to cool off a little bit. It worked fine, the water being surprisingly cool. Coming out, a guy sitting with some papers outside asked me if I was feeling fresher now. I took a quick shower and went outside for a chat with Isaac, who works in the mining as an instructor of some kind. We went off to get some beers in a liquor shop and drank them in the lodges premises outside of our rooms. We repeated the process a second time, there being no fridge accessible after six and the temperature being way to high to buy more than two beers at a time. The only fridge was in the reception area which is open from 6 to 6. We chatted a while while emptying the beers and cider for Isaac, until I decided to leave and try my luck at the festival. I took only a little money and my phone and started walking towards the stadium which was the festival's venue. I counted my money after a little while and thought that with the R 200 entry fee, my money would soon be exhausted if I decided to buy some food and beers. I thus walked back, fetched my card in my room, went to the opposite petrol station, drew some cash, brought back the card, and headed out again towards the festival. Approaching on the road, I saw the cars being stopped by a roadblock and some security guards who told me they wouldn't let me through without a ticket I should have bought at Shoprite. I told them I wanted to buy one inside, but to no avail. Shoprite was closed, so I made my way to a nearby bar. The people in the bar were also thinking that I should've been able to get a ticket at the entry. I had a jolly time in the bar.


The next morning I invited Isaac for a coffee before splitting our ways. I tried the minibus taxi rank, for a minibus taxi to Mica and Ohrigstad, but none was heading this direction. I had chosen this way in order to reach Pilgrim's Rest about which I had read somewhere. The guys at the taxi rank told me to go to the road leaving towards Mica and try my luck hitchhiking. With two other guys we jumped into a car who brought me up to the freeway. I was quite surprised to find out that the waiting cars were functioning like minibus taxis insofar as they were waiting to be full and taking fare for the transport. There was even one guy who seemed to be arranging the best rides for the passengers. This guy found me a lift for R 70 down to a few kilometers short of Ohrigstad. During the ride I dozed off a few times until we reached the first pass into the mountains which is absolutely gorgeous. 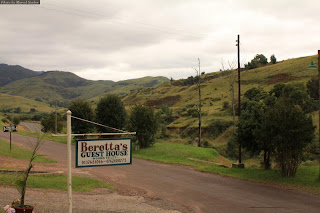 Two guys were already waiting there, and told me they were waiting since 11. One of them said I'd be the lucky guy if we got a ride soon. Not 15 minutes later, a car passed which stopped to take us with. We climbed into the loading space of the bakkie and drove of on the winding road towards Pilgrim's Rest. The sun was shining and hot at first, but soon the clouds took over the sky and it got fresher and fresher. As we went higher, the temperature dropped quite a bit. About 30 minutes later we arrived in the tiny one horse town after passing Robber's Pass.


I inquired about accommodation and quickly found a room for R 250, which was not so good for my budget. If I had known earlier, I probably would have gone on to Graskop where there are backpackers (as I found out the next day). The room was in a charming old guesthouse managed by a charming lady who was very helpful as well. The town started as a gold mining camp in the 1870's. Now it is just a tourist attraction with nice old buildings, museums, and crafts for tourists. I had a draught beer in the Church Bar of the Royal Hotel because a sign said it was tradition that every visitor to Pilgrim's Rest should have one there.


I didn't have much cash left in my pockets, but having seen an ATM sign, I wasn't worried. Big mistake, because the ATM didn't work and nobody could give me money using my Visa card. So the owner of the guesthouse arranged a friend of hers to pick me up the next morning on his way to Graskop so he could help me get there. For once I decided to buy some souvenirs, and I used all my cash for that.


The next morning I woke up at 6.30 and got ready quickly. At around 7 the friend came over and told me the taxi of 7 was already gone. We left at half past for the road where we waited about 1.5 hour for one of the minibus taxis to gather enough passengers to leave. About 30 minutes after driving off, we arrived in Graskop. I withdrew some cash and paid the fare and some airtime to the friend.


After quickly answering some e-mails in an internet cafe, I walked to the end of the place where the road I wanted to take left town. A few cars passed without stopping, but after a few minutes a delivery truck took me with. We drove through beautiful scenery which is part of the Blyde River Canyon. There are a lot of pine plantations as well. I got dropped off at Forever Resorts where some minibus taxis were waiting for more passengers. I was assigned to one which was only missing two passengers, but there was nothing around. About an hour later and one more customer, we left the place. A slow drive later, we turned off the road to drop off one of the ladies in a small settlement a little bit further on a dirt road. The driver finally dropped me off at the crossing with the road towards where I wanted to go. From there I got a ride with a nice Afrikaaners couple who were hailing from Jo'burg and were on their way to a private game reserve east of Hoedspruit for their honeymoon. I managed to recognize the place where I had to get off and called Katryn to be picked up by Nelri a little later.


The nice thing in traveling this way is to use the same transport as the locals, and thus to meet quite a few people. The downside is that if you want to stop, you will have to wait for another transport which might just never come.
established by chmger at 08:30