I left Iringa in a bus to Arusha. The bus comes from Mbeya where it probably should leave around 6 and pass Iringa around 10. As it happened, and as it is usual, the bus only arrived around 11. Then instead of the scheduled 14 hours, it took 16 hours to get to Arusha. We got there around 3 the next morning. 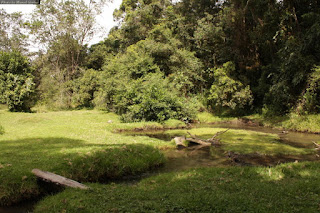 Tiffany, whom I had met on the Ruaha tour, organized me a pickup with a friend, Mponjoli, she had met in Arusha. He waited several hours and then brought me to a cheap lodge a little outside of town. Ben, the owner of FairTravel had told me I could stay at his house if I arrived before midnight. He said I should call if I didn't find any place to stay. But everything turned out to be fine, thanks to Tiffany.
The next morning Mponjoli fetched me at the lodge and we took a dala-dala or two to go to Ben's house. There I prepared the mountain equipment I would need for the expedition with him. When that was done, I took off with Mponjoli and we went back to town for Internet, food and beers. We also found another cheap guesthouse for me, as Ben already had a group of 5 or 6 people staying at his place. 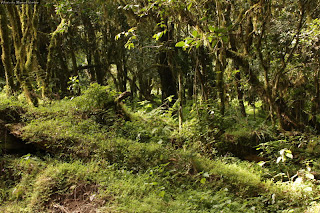 The following morning I took a piki-piki to Ben's house where my main luggage and expedition equipment was. From there we left with Honest who would be my tour guide, to Arusha National Park. On the way we picked up our porter and cook, Frank.

Once we get to the park gate, the driver (Eric) and Honest go to pay the entry fees. I wait a while and talk some to Frank. After a while they came back and we drove through the park to Momella gate. There, Frank and Honest get their stuff packed and ready for the trek. Then we only have to wait for the ranger who would guide and protect us. At Momella gate I met a married Irish couple, Catherine and Conor, who were on their second honeymoon. They originally had wanted to go on this trip one year earlier, but after their wedding, didn't have the funds. Another married couple, Laura and Javier, from Pampluna in Spain, were on their proper honeymoon. We each were on the trek with separate tour operators, and so each had our own guide and porters.

The Irish couple had been dropped off at a lodge in the park and had been told to present themselves at Momella gate at nine the following morning. Another guide would then come and take them up to Mt Meru. As we arrived around 11, they already had been waiting for more than two hours. We finally all left around noon.

The first part was mostly flat and through bush. We saw a herd of buffalos nearby the road. Then it started getting forested and climbing somewhat. The forest looked quite humid. The whole vegetation had more water than its southern counterparts. We stopped to eat our lunch boxes at Fig Tree Arch. My lunch box had a quarter chicken, chips, an egg, an apple and a cookie in it. It was way too much so I kept the egg and the cookie for later.

After 4 hours or so of walking, we reached a plateau which was out of the dense forest. On the left side we saw Ash Cone and all opposite us a huge dropping wall rose up to the sky. That's where we would be walking up the following day. Currently, we had risen enough and reached our first stop, the Miriakamba hut at 2500m above seal level. We had just done our first elevation of 1000m. 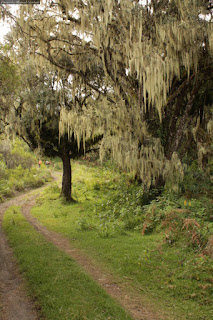 At the hut we were helped to our rooms for the night, each group having his private dorm of four beds. Catherine and Conor still didn't have any news from their crew. They were simply not there. I quickly got some hot water to wash myself, and Frank got some ready for Catherine and Conor too. Honest later told me tea was ready, and that I should invite my friends as well, as they wouldn't have any otherwise. Tables were nicely dressed up for us and for Laura and Javier. Although they had separated them, as they had a different guide. We then all drank tea together and told our guides to dress one table for all of us for the following meals. During tea, Catherine and Conor's crew finally arrived. But they didn't have sleeping bags for them. The tour company had told them it wasn't necessary for them to take any as they would be provided. After tea, which was served with biscuits and popcorn, we soon had dinner.

The following morning we woke up just before seven to wash and then get breakfast. Although I couldn't sleep at all, so I went to watch the sunrise way before that. I even spotted Kilimanjaro in the distance for the first time. After breakfast we left for our second day, up to Saddle Hut. There are a lot of steps on this part of the hike. As I was very tired, I already felt some exhaustion while climbing up. The first cabin being at 2500m didn't help, and we went up to 3500m. Honest took out some stuff out of my big bag, and carried it himself. I tried to protest, but to no avail. The others all had small day bags with only necessary stuff for the hike. But there bags were now weighing less than mine. After arriving at Saddle Hut, we had lunch, we washed quickly and then had some tea before climbing the 300m up to Little Meru. From there we had our first glimpse of what the view would be the next day. But only slightly. Catherine and Conor decided to rest at the hut, as with her blisters it wouldn't have helped. And it didn't help the next two days anyway.

After the short climb we had dinner at five thirty and then went to sleep. We had to wake up close to one in the morning to start ascending the summit. We put on all the warm clothes we had been carrying around for two days and presented ourselves for tea and biscuits. A necessary step before starting the climb in the now cold weather.

It took us about an hour to get to Rhino Point at about 3800m. Hiking in the dark is not so easy. And it's even less easy if you have a headlamp that doesn't light too much.

After some time I had troubles getting enough air, so I had to slow down and separate from the group. Without any hiking for three years, I was not in a good shape. I took it really slowly, but it was a tough climb. At sunrise we met the other two groups again at the ridge close to the summit. We watched the sunrise there before attempting the last bit which was the worst. The really steep climb presented huge steps and winded me out at every one of them.

I finally made it anyway, and I was really happy about it. My highest summit so far (and probably forever).

After that we walked back down, which was much easier and quicker. Walking sticks are a great help if you have weak knees or other leg problems. We rested a while at Saddle hut and had lunch there, and then went on down to Miriakamba hut. As Catherine and Conor had a flight to get the next day at three in the afternoon, their guide arranged for them to be picked up by the rescue car. But after walking down the next day with Laura and Javier, we learned that they were still waiting for their lift. So they would have better come with us to see the waterfall and the giraffe.