In Iringa I spent a night in Wihanzi Guesthouse which had been recommended to me by Pat & Tom. Once I found it, namely after having been way too far down one road, it happened to be really close to the bus station. The only problem was communication, as I don't speak Kiswahili, and the staff doesn't speak English, or any other language that would help for that matter. But I inquired for Ruaha anyway, as I saw a notice for budget travellers.

Costs to Ruaha are calculated by car to go there, do game drives and come back. Accommodation and food is calculated per person. As I am alone, it would be quite expensive. The first price was at USD 350.-. As it was late, after my bus drive that took forever, I had to wait until the following morning to go to check prices at other companies. I first went to Warthog, which Pat & Tom used for their trip to Ruaha. But the price was still really high: USD 250.- for the first day, and then USD 150.- for every successive day. That means if you plan to spend a night, the cost for the car is USD 400.-. That is without food and accommodation so far. I walked into Masai Alley, which is famous for its crafts market in Iringa. There I bought some beautiful paintings and told the guy about my problem finding cheap safari. He said he knew someone who could maybe help me. 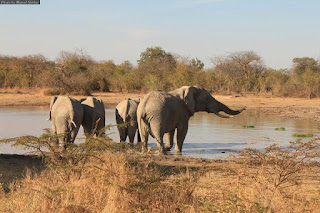 A little later, a guy hails me in the street. He wore a dirty old t-shirt, so I thought he wanted money. It happens it was the guy who could help me with my safari. Michael, the guy's name, brings me back into Masai Alley, further in, where there also is a lodge. Central Lodge, managed by Titho, an astonishing fellow. He's very friendly and helpful and said I could stay here for the same price as I pay in Wihanzi. I said I would come, but probably only after my safari. Michael tells me he's trying to reach someone who was interested in going to Ruaha. That guy couldn't be reached again, so I ended up bringing my stuff to Central Lodge with Titho's help.

The next day still nothing new. Some people have their own car, but is full, other people simply don't go, and most of all, there aren't that many tourists around. I end up helping Titho and Michael setting up a Facebook page for the lodge and for their tour operator company, as well as registering on different hostel and lodge websites.

The following day I get to use Titho's bicycle to go to Isimila, the stone age site where there also are natural pillars. I first take the wrong road that leads me 5-10 kms down on the road to Ruaha. The bicycle's saddle is low, so I can't pedal efficiently. The saddle's quite hard as well, and soon I have a butt-ache. But I get back up to Iringa, and decide to try the road that should lead me there. The way down from Iringa Town Centre is quite easily done, but then it's 15 kms towards Mbeya. After some time and a lunch of fried bananas with onions and meat, I finally get there. There I meet the tour guide who shows me around and tells me there are different tools that had been used in the stone age: round killing stones, spear killing stones to finish killing if the animal is not dead, scraping stones to remove the skin, knives to cut meat, and axes to cut off limbs. After showing me the heaped tools that had been excavated, she shows me around the magnificent natural pillars. Two dogs I met at a nearby lodge which was otherwise empty, followed us around. The way back was much quicker as I was getting used to having a butt-ache. 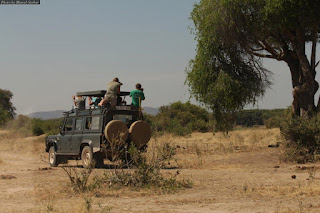 The same evening, Michael told me he often works with another tour operator who can arrange something cheaper for me. So we gathered the same evening and agreed to a price. They told me they have other people leaving the next day as well, but that the car is full. The following day I go buy some bread, peanut butter (the first was finished) and tea bags, as breakfast would be cheaper that way. Later I get picked up to go finalize the deal at the tour operator's office. The deal gets slightly less good, but still a lot better than the full price. Anyway, we arrange for me to get picked up at two in the afternoon. Both cars would be traveling together.

Felix came around two, and picked me up. He would be my driver. He doesn't speak too much English, and I still didn't learn much more Kiswahili. But communication is possible, if kept simple. He drives fast and quite wildly on the dirt road towards Ruaha. The 130 kms are supposed to be done in two or three hours. I think just narrowly didn't kill a kuku (chicken) on the road. At some point the right brake didn't work as it should, and we spent half an hour trying to fix it. Me watching him trying to fix it, as I'm no good at mechanics. The brake doesn't want to be repaired, so we just leave it off and roll on with only the left brake. When I asked Felix about it, he says “modified”. 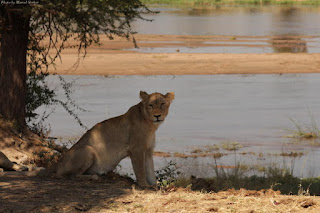 There are quite a lot of people and villages on the road to Ruaha and we dangerously pass along. Nearby the park entrance, we spot some elephants at a waterhole.

On the bridge closest to the gate we finally catch up with the other car. It's full of 5 girls and one guy, all volunteers or teachers of some kind. We watch a spotted hyena walk by, and then the sun sets beautifully. Another African Sunset.

At supper, I finally introduce myself to the group, and eat together with them. The menu is quite small: kuku and chips, kuku and rice, or maybe beef could be had as well. I order kuku (chicken) with chips, but it happens to be a small quantity. For the price we pay, it is quite bad. We are supposed to order breakfast for the next morning, but I don't order anything as I plan to eat my own stuff. 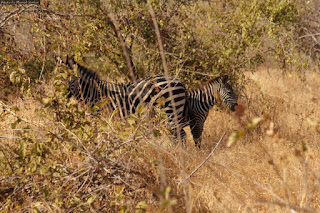 We then drive to our sleeping place, called the bandas. I think banda means hut in Kiswahili, but I am not sure. Anyway, they are simple houses with concrete floors and corrugated iron roofs. Just to be sure, I asked Felix if we were actually leaving at six in the morning or if we get up at six. He said we would be leaving at six.

The next morning I woke up at 5:30 and got ready. At six my stuff was in the car and I was ready to leave. But nobody else was there yet. Around six the others woke up, and we finally left around 6:15. The sunrise drive was amazingly beautiful. We saw many birds, but not many other animals. But the landscapes are gorgeous.

After sunrise we went to have breakfast at the same place where we had supper last night. I expected to eat my own breakfast, but they made a pancake and spanish omelett with sausage for me anyway. So I ate it. But it cost me another USD 3.-. We then took the lunch boxes and went out again for our morning game drive. 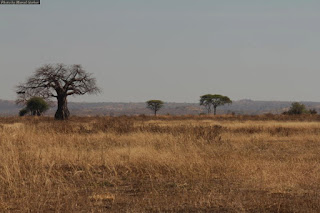 We drove out quite far, and a different way from the other group. We didn't get sight of another car for quite a while, which was nice. We saw tembo (elephants), swala (impalas), tandala (kudu), twiga (giraffe), ngiri (warthogs), niuni (monkeys) and mbuni (ostriches). After some time driving around, we got a call about simba (lions) lying somewhere 10 kms away from where we were. So Felix drove fast and during the trip we passed quite a few dazzles of pundamilia (zebras). We then crossed path with many cars coming from the simba sighting. As we got there, it was already around midday, and the lions were lying in the shade. We stayed a while watching them (and I watched the guys from the other car as well). Just for good notice, you shouldn't make yourself visible outside of the car's outline. Animals, but particularly predators, need to keep believing that cars are big animals without small animals inside. If you stick out of the car, the predator might recognize you as a human and decide to eat you for lunch.

Speaking of lunch, the previous night I had asked for a lot of rice for my lunch box. Guess what, it wasn't enough again, and we barely had beans and vegies inside. And all that for USD 4.-. You can get a full meal for less than USD 1.- around here. And they might even serve you again if you're still hungry. Not so there. Luckily, Tiffany, one of the other car, had some pizza for lunch, which she shared as she wasn't hungry enough to finish. 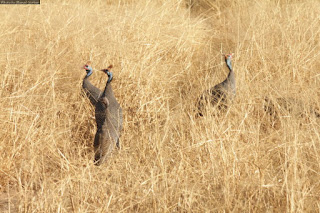 After that we went back to our respective cars for the afternoon drive and the ride back. I asked Felix if I could drive and he said yes. Although he wouldn't let me. We saw a flight of ground hornbills, some vultures and an eagle. A while later Felix said I could try out driving. So I drove around the park trying to stay on the road while looking out for animals.

A while later we reached the gate and I thought I would pass over the driving to Felix. But Felix was quite content and happy to be able to write text messages. So I kept on driving. We had to stop at the first village out of the park to pick up some mzungus. It happened to be Stephanie, a girl I tried to call to know if she could help getting me a safari for a budget. She knows Pat & Tom McCabe, they're all with Peace Corps. We picked her and her friend up because she called Michael, and Michael asked me if it was OK. She looked a bit unsettled when I stopped the car and she saw me driving and Felix sitting next to me. She probably expected a usual safari setting: a mzungu tourist and a local driver and tour guide.

I drove all the way back to Iringa on the dirt road. Just before town, Felix took over and drove into town. Don't tell anyone.
established by chmger at 16:14