The End of the Game

After nearly ten months away from family, friends and Switzerland, I'm back in town. I've left for my adventures on the 26th of August 2012 and was back on the 24th of June 2013. That's the longest period of time I have spent out of Switzerland.

When I left I wasn't sure at all at about what I was going to do. Now it feels great to have lived through this amazing adventure. Yes, it has been kind of an adventure. Starting with the Divemaster course, I didn't know where I would land or whom I would encounter. It comes out I have met some great people at Tofo Scuba and Tofo in general, and some less great ones. But then, you can't be friends with everyone I guess.


I am sorry I didn't send many postcards. They were not easily available, and if they were, then mostly old looking ones. If I pay more than a dollar for a postcard, I want it at least to look nice. And then you still have to find a post office to send them off.

I have lived through so many things in these ten months, more than I would have in a normal year at home, at work. I loved taking care of our customer's needs and accompanying them on dives during my course. The boat rides weren't always easy but hey, who wants a life that is too easy? Five and a half months spent diving in this marvelous spot where you encounter whale sharks (if you're lucky; and very lucky on a dive), manta rays, devil rays, stingrays, other rays, potato and other groupers, reef sharks, leopard sharks and so on. The reefs are a beauty of their own. Maybe not as colorful as other places you might go, but still quite a sight. I would only recommend going to Tofo for some spectacular diving. Tofo Scuba is very professional and always puts customer's security first. Their well trained IDC instructors really know what they are doing.

Enough praise for TS for now.

Someone said to me one day, that for a person to be generally happy, he or she needs to see a new place every year or so. I've seen tons of new places in only about 4 months of traveling. As it took me five and a half month to complete my Divemaster, I only left Tofo for good by mid-February. There has been this damn pool which had to be re-plastered and generally improved and then December came along and thwarted my plans to be a Divemaster by the end of the year as all the South African Christmas Holidays people came in for Ocean Safaris. But then I finished in January and had a great Visa Mission to recover my lost passport. I wrote lengthily about it, so I won't repeat myself too much. But just to say, this was, if it hadn't been for such a dramatic reason, a great little trip around Swaziland and Northeastern South Africa. But so has been the wedding I have been invited to last year in October. Black Jack as he calls himself, this really awesome fellow working with Lorien for Travel2Mozambique invited me and a German guy doing a practical at the same company for a traditional wedding over a week-end. Black Jack spent some years in Germany during the war in Mozambique, so he speaks a very good German.

During those Christmas and New Year holidays, when I got a chance at participating in a complete Open Water course, I got invited by Nelri's mom, Kathryn, to come over and visit them in SA. Nelri was doing her OW. Kathryn already was a diver, but hadn't dived for quite some years, and was a bit insecure concerning the currents on Giant's Castle. So I took her by the hand and accompanied the group just for her. She was really glad about it, so she could enjoy the dive and get more confident about diving in rough conditions again. Sometimes you don't need much to do something you feel a little insecure about, and then you enjoy it greatly.

I've spent more than a month with Kathryn and Nelri at their place in Hoedspruit. It's in the National Park area and is one of the entry points for Kruger Park and for a lot of private game reserves. I've spent an amazing time there watching wild animals at the door step. Yes we lived on a private game farm property where there are giraffes, warthogs, zebras, wildebeests and so on. During this month I also started a Field or Nature Guide course. But as I would probably never would use it, I thought it too much work to learn all the 50 trees, hundreds of grasses, mammals with gestation periods, arthropods, snakes, birds, fishes, insects, basic geology, basic astrology and so on by heart. It was just too much to ingest and digest on such a short period of time. But I've had a great time during the practicals and learned a lot more than I would have on normal game drives. I was put in different lodges where I helped out a little in order to see what there is to do and how it is done. I also met some great people during these times.

Although Kathryn organized me a gyrocopter flight, I still got itchy to move on after a month of staying static again. Perfect timing, as the Kathryn's aunt was coming over to stay for a while. So I left and went to “My father's town” (Johannesburg; silly joke) and met again with Laurentia and Robert, my couchsurfing friends from when I first got to South Africa end of August. My luck that Robert couldn't go back to work so he was there with Laurentia. Unlucky for them though, as it meant he wouldn't get any salary for the time being. The unrest that prevented him to go back to DRC must have settled since, as he's currently back at work. We had scheduled another meeting to go and visit Soweto, but now that Robert is working again, the plan fell to pieces. Thus I flew home over Dubai instead of Johannesburg. Which is a lot shorter anyway.

Then it really started with Gaborone in Botswana, from where I left for Zimbabwe. I still remember the Botswana customs officer's chuckle when he saw me going to Zimbabwe. I still don't know why. I spent three great weeks in Zimbabwe and saw many a beautiful scenery and amazing old sites and ruins. On the path of Cecil John Rhodes and his crazy empire-building. And seeing the Victoria Falls again and in full force this time, was absolutely amazing. The change is impressive.

From Zimbabwe I went up to Zambia, where I spent most of my time chilling out in Livingstone's Jollyboys and in Lusaka's Kalulu backpackers. But I've managed to make some new lifetime friends I think. Eve and Andrea, the two Texan ladies I've met in Livingstone took me on to Kafue and Eve then advised me to go to South Luangwa. I've had great pleasure in traveling with you girls for a few days. South Luangwa proved to be absolutely marvelous. The setting of Marula camp with its river view is gorgeous and a place where you can sit for days watching the hippos and the birds. There I met this crazy Spanish dude Marc, who did a motorbike trip from north to south.

From Zambia, my travels led me eastward to Malawi. I crossed the border and went to Lilongwe (it's a lil' long way) where I caught up with the guy from Wales whom I seemed to be following from Lusaka through Chipata to Lilongwe. But then our roads separated.

Again I “settled down” for a few days in this beautiful spot of the world called Monkey Bay, where Marc joined me. I got a little sick there and was really tired, so that I ended up spending quite some time sleeping. Then I left for Cape Mclear where I spent another five days or so, being sick and recovering. After that I had seen enough of Malawi and made a two days trip out to Tanzania. I didn't have any tour guide and relied upon what other people had told me. But nobody had told me anything about the southern part of Tanzania, where I would enter the country. People speaking Swahili didn't help much. But then I met this lovely couple, Pat and Tom who took me under their wings for a few days. They invited me to Simambwe, the village where they are doing 2 years of Peace Corps work trying to improve the choos (toilets). In the process I helped Michael, father from their hosting family, to get some computer and spreadsheet knowledge.

After that I traveled to Iringa in order to visit Ruaha NP. As I didn't find a good offer straightaway I spent some time helping out the manager of Central Lodge getting a Facebook page for the lodge, and registering it on different hostel booking sites. I finally took a cheaper offer (still expensive) and met Tiffany on the way. From Iringa I planned my next steps before home: my holidays at the end of my traveling. I organized a trek to Mt Meru with FairTravel and five days of diving out of Dar es Salaam.

I've discovered some new beers and have collected a certain number of SIM cards. Although more and more the phone companies cover multiple countries. So I ended up taking Airtel cards in Zimbabwe, Zambia, Malawi and Tanzania. But my Zimbabwe one got stolen with the phone.

This is the End of this Game. The next Game starts soon but won't be about traveling. I've ended up being accepted as a volunteer, not in Peace Corps, but at Paléooooooléooooooooléoooooooooo ! :)

I will miss the cheap food you can get anywhere, the street vendors selling stuff to bus and car passengers, the negotiable prices, and a lot more. I won't miss people thinking I'm a filthy rich mzungu, the crammed busses and minibusses and so on. All in all, it has been a very positive experience!

Thank you everyone for your support, in whatever way it was given, and for some, still giving.


And what I certainly won't miss, are the African style choo (toilets)! 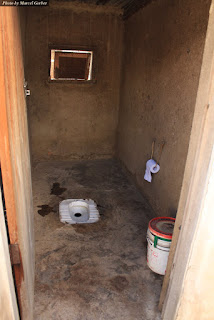 And congratulate my cow for having followed for more than 28'000 kms! She unfortunately lost her two forelegs in a diving accident. A moray eel bit them off. Untrue story. 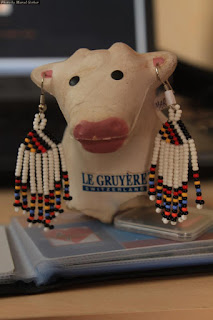