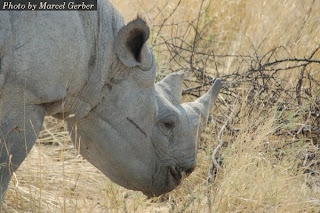 After lunch in Halali camp we spent some more time at the pool because driving too soon wouldn't prove to be a good shot to see game in the park. We left at three or four in the afternoon and drove in the general direction of Okaukuejo Camp passing. One moment I was looking to the front and so a lots of cars stopped on the road further ahead. I took out my camera because I couldn't see anything so I supposed it must be not too tall but very interesting. When we got near we saw that a lion cub was sitting on a small wall next to the road. The lions hide in a pipe under the road during the heat of the day. We stayed a long time and watched other lions come out of the hiding hole. The cubs played around a bit and the others lied down. Later we drove on to camp and had supper. After supper we went to the waterhole which was said to be the best waterhole in Etosha. We stayed there a long time watching the animals come and go like it were a television show. We saw some giraffes, then a jackal came by and later some rhinos. At one point there were seven of them drinking and wading in the water. Then an elephant herd came by and the remaining rhinos fled the waterhole. Two of them came back a while later but not too close to the elephants.


The next morning was an early start again and not ten minutes after leaving camps we saw the lions again. This time we even saw the big male with his crown from a distance. The lions were at the exact same spot as the previous evening. We could see some of them had blood around their “mouth” so we thought they had had their kill the previous night. At some point I got on top of the bus and one of the cubs watched me intently for a while. I think he wasn't too pleased with me standing up there and Cliffton wasn't either so I laid down again. We took a lots of pictures again and then drove on out of the park.
established by chmger at 12:42