The Namibian Coast is full of expensive activities. You can go sandboarding, horse-riding, seeing animals on land or in water, fly over the dunes and so on. But i only did two of those activities. If you travel for more than a few weeks, you have to see that your budget reaches until the end of your trip. 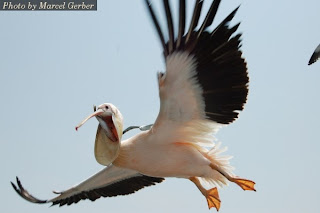 The first activity was a tour on a big catamaran in Walvis Bay. The day started out cold and gray. The Namibian coast around here with its arctic ocean currents never reaches above 25° C. Most of the time it's cloudy around here. In the afternoon there's some chances of seeing the sun for a while, until sunset.
A driver came by at my hostel at 8 in the morning to bring me and others from other hostels from Swakop to the dock in Walvis Bay. There i registered and paid, and we embarked on a small boat which was to bring us out to the bigger catamaran. Unfortunately we didn't set sail for a long time, we drove out with the boat's motor. Lots of sea gulls and pelicans followed our boat, not surprising as we had lots of fishes to feed them. All we had to do was put the boat straight into the wind so the pelicans could arrive next to it like bombers and catch the fish either directly from the guides hand or from the sky (the guide threw it up to the birds). Then the seals or sea lions (those with outward ears are sea lions and those without are seals is what the guide told us) took our boat as an entertainment platform where there is free fish for everyone. They came on the boat and people could touch the tame ones and give them a fish. We then saw some bottlenose dolphins (like flipper) but they wouldn't come near and play with us, so we went farther out. Luckily there were other dolphins there and they wanted to play with us for a while. We then set sail for a little while and cut off the motor. We watched a seal colony from afar, and saw the waves break on the sandy beach. Later we drove back to port without having seen whales or turtles. 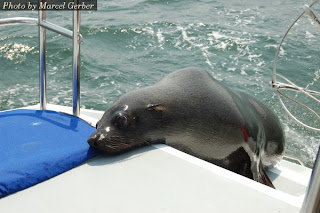 When i came back there was another person's luggage in my dorm room. I went out for a laundry and when i came back i met Joe the englishman. He's from northern England (near Newcastle) and travels around Africa since the worldcup (he was in South Africa during the WC) and will be travellin' for a year. I told him i would go sandboarding the next day and he decided to join me, so we booked for two lie-down sandboarding at the hostel. 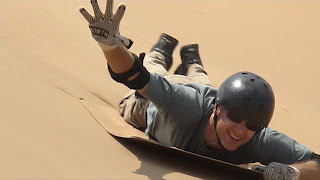 Sandboarding is quite fun, but be prepared to eat a lot of sand. We were fetched by a driver at 9:30 in the morning and drove out to the dunes on the equipment truck. There was another person, a girl named Ines in the truck. She's from Portugal (around Lisbon) and is a doctor. She's travelling for a few weeks in Southern Africa. When we arrived at the dunes we were introduced to the other people doing the activity and to the equipment. We then walked up the dunes and began sliding down, which we did 7 or 8 times. Walking in the sand is as easy as walking in the snow, but less cold. On one slope i did a speed record (my record not the best speed ever) of 74km/h, but it doesn't seem that fast when you're at it. We then had free beers and sandwiches back at the cars, before going back to Swakopmund to pay our due. We then took a shower and brought our sandy clothes to the laundry. I even had sand in my underwear... Afterwards we picked up Ines at her hostel and went back to Alter Action's office (the guys who organize sandboarding) to watch the movie they made and the pictures they took. There we watched how Joe leaped from the jump and ate some sand, he litterally landed face down in the sand.

We then went out for a quick pizza and then for some beers, still with Ines and Joe. Later on we went to the only dancing/pool bar and played pool a while. But the guys here were kind of serious, not as funny as playing with other guys the other night.
established by chmger at 13:13