This night i didn't feel very good and stood up to go to the toilets. Later on i had to go out again because i felt i might throw up, which i ended up doing behind the campsite building. I still do not know what caused it, because nobody else was sick and i just can't remember having eaten anything special. So the next day i felt pretty bad. I didn't have breakfast and barely ate anything at lunchtime. In the evening we had curry chicken which was very good but of which i didn't eat too much from fear of being sick again. 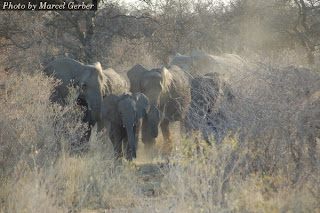 This day's highlight, after having set up camp in Namutoni in Etosha National Park, was the elephant herds coming in for a drink at a waterhole. We drove around a while starting at 4pm because earlier most of the wildlife is keeping low in the heat. We saw a lot of animals like springboks, kudu's, oryxes, and other antilopes, giraffes, and so on. As we came to a waterhole we saw a giraffe drinking and some other animals like pintadas around.
Two other giraffes came to the waterhole some time later and watched around. Most of the time giraffes drink in group because of their vulnerable position while bending down. One giraffe drinks while two others look around for predators. Then we saw the first elephant herd arrive. Those were mostly female and baby elephants. The old bulls wander around single. We saw 4 herds arrive at the waterhole in the time we were there. It's a impression you never forget when you see an elephant herd coming out of the bush. After this event we went back to camp for supper. After supper we went to the waterhole where we saw two elephants drinking for a while. 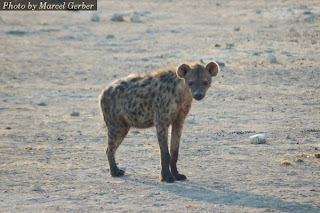 The following day we started early with breakfast to be on our game drive as soon as possible. With Vincent we woke up almost an hour later than the others, but as things go, when all things were packed, we were ready to go too :). The general direction of the morning drive was Halali campsite (which means "end of the hunt" in Germany, says Cliffton our driver - then he adds: "what kind of German are you not to know that ?!", did i mention i'm Swiss ??). We were not driving directly to the campsite as this would have proven a quick uneventful thing. We drove crisscross in Etosha to many different waterholes. At one waterhole we saw a hyena approaching and trying to get near some springboks. Unfortunately the drive-in to the waterhole (that means the buses and cars) was between it and its preys.

At one moment during the game drive Irka (or i think i remember it was her) wondered if it was a cat she could see some distance away. It definitely was. What she saw was a cheetah (guépard) mother's head. We later discovered there were three little cheetahs with her. We spent a long time there watching her watch a springbok herd which didn't come any nearer. Some cars wondered what we saw but just drove on thinking we were watching the scenery as they didn't spot the cats. We saw the cheetah stretch, tend to her kids and keenly watch a springbok herd. It's very rare to see cheetahs in the wild so we were pretty excited about it.

The next animal we saw was a rhino grassing on the roadside. We considered ourselves extremely lucky and were thankful of Cliffton's knowledge and experience of Etosha. We drove to one last waterhole this morning where a lot of different animals were coming in for a drink. 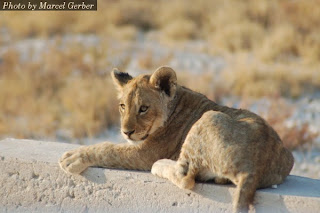