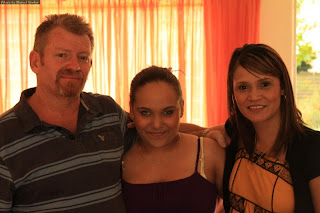 I bought a City to City bus ticket from Hoedspruit to Jo'burg after having contacted Laurentia to see if it was OK to crash a night or two at their place. She said she'd ask her husband Robert, and a little while later answered positively. The bus ticket was for the next day, and so I drove one last time to Hoedspruit with Katryn and Nelri. They left me when the bus arrived. I climbed into the coach and asked the driver if he could drop me off in Midrand, because it was much closer to where I had to go than the train station in the city centre. The driver told me to relax and take a seat, which I did.

The bus route went over the pass I already used twice starting from where the Oliphant's River comes out of the mountains. After that we drove down to Ohrigstad and from there to Lydenburg. The countryside was getting flat again, and quite boring, so I mostly read and dozed off a few times.
Arriving in Pretoria, I asked the driver again to drop me off in Midrand, just to be sure he wouldn't forget. Sean, the American I met in Maputo, told me that he wanted to stop in Inhambane, but nobody told him and when he finally asked, they were already north of Xai-Xai. So I wanted to make sure that wouldn't happen to me. The driver told me to relax again, which I did again. 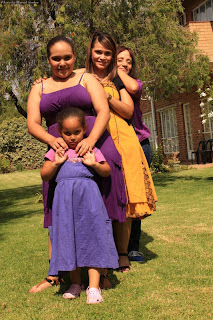 Once at the Caltex stop in Midrand, I told Laurentia that I just arrived. She was still working and would pick me up about an hour and a half later. When she got there, the traffic was quite heavy and she came along the other side of the highway. My mobile phone isn't working so good since it fell into the water in Inhambane in January and it couldn't pick up a connection right on the moment I needed it. But we finally managed to find each other and we drove off to her and Robert's place. On the way there I learned that of the 3 dogs they had last time I visited, only Butch was left. Ouma had had to be put out and the little one had been given to someone (don't remember who).

The next day was a public holiday and we went to visit her sister and niece in another part of the city. We had a nice day with plenty of food and wine. On my last night here, we went to Emperor's Palace Casino to watch a show.

I was then bound to Gaborone without knowing where I would sleep the night when I would get there at about 9 or 10 in the evening. 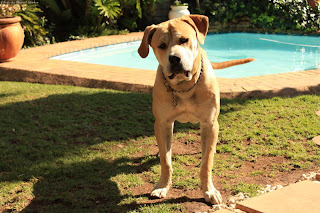