On this Saturday of Easter weekend I decided to go and visit the Khami Ruins, which lay about 20 km out of Bulawayo. Eric, an American I briefly met when I arrived in Packer's Rest in Bulawayo, told me he hired a taxi to get there and back which cost him a total of USD 120. That's quite a lot of money to visit some old ruins. I thought I'd try to get there by minibus commuter.

When I got to the taxi rank, I was told I need to go to Pumula and from there to what I understood as Khami Precinct, but turned out to be Khami Prison. From there I would have had to take a taxi. The driver of the commuter to Pumula told me he thought I wanted to go to the End Message congregation when I told him my plans and asked for directions in Pumula. He offered me to drive me to the ruins for USD 20, telling me there was no public transport going there and barely any other vehicles anyway. 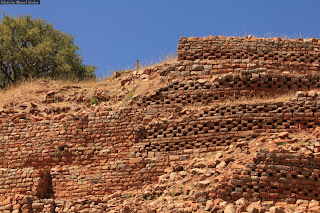 I accepted and it was a good idea too as we drove on dirt roads without any traffic at all. He said they (he and the operator) could wait for me at the ruins until I wanted to go back if we could agree on a price. When asking him how much they made in a day, he said about USD 120 to 140. He said for 2 or 3 hours of waiting he would ask me USD 80, but I counter offered USD 60 and he agreed quickly. It was still fairly expensive, and I probably should have started lower.

The city had been built by Shona people between the 15th and 18th century. They had migrated from Great Zimbabwe where they had built a city too. The remains are the places where the higher ranking people like, king, princes, politicians and so on resided. Between the different ruins, which are quite widespread, the people had lived in huts or rondavels like they are called in ZA. The buildings had multiple entries/exits. One was for the residing people, and another was for the women and/or staff. 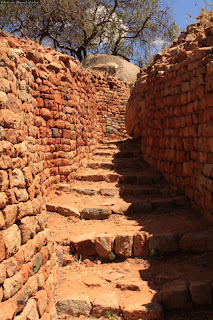 After about one and a half hour I was finished visiting. We drove back to Pumula and started taking on people. They wouldn't leave a chance to make money on top of my hiring them. Some of them wanted to sit in front where I was sitting, but the driver and operator always made them go to the back telling them it was a “special hire” and that I should be left alone in the front seat. I wasn't unhappy about it. At some point a child shouted “Kiwe!” which is Ndebele and has the same meaning as the Chope/Shagaan “Mulungu” and the Shona “Murungu”.
established by chmger at 12:33