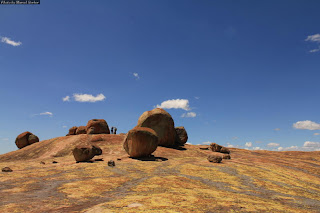 The Matobo's is a park with a large number of rounded boulders which resemble bald round heads from which the name comes from. At a site now called World's View by Cecil John Rhodes, founder of Rhodesia (Zimbabwe), his remains lay in a stone grave with two of his fellow companions of the time.

I booked a tour to the Matobo's (or Matopo's in foreign languages) from my accommodation in Bulawayo, The Packer's Paradise. At first I was told I would be alone, and that it would cost me USD 150. If I could find at least another person it would then cost USD 120 per person. On the day before, I visited Bulawayo, and at the end of the day decided to go to the natural history museum, which turned out to be a great idea. There I met Claire, an American who is traveling with her friend Thomas and who was keen to visit the Matobo's. They wanted to go anyway, but where told there were only groups of more than 30 people going out the next two days. As it seems, the different operators don't speak with one another. So I explained her my case, and asked her to join me on the 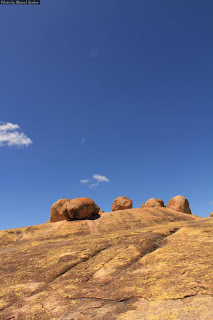 tour. So we went back to my accommodation to book the tour. The following morning, the staff were making food preparation for the tour when Luis came in. He just came out of the bus from Vic Falls and was keen to visit the Matobo's, so I invited him to join our little group, which he did.

Luis quickly had some breakfast and then we drove off with Owen and Kempton, our two guides for the day. The Matobo's National Park lays only about 40 kms south of Bulawayo and we reached it less than an hour and one roadblock later. We started with some shrine where all kind of people from all kind of places were cremated and their ashes buried there. After that we drove on and visited some cave paintings from the San Bushmen, between 5000 and 10000 years ago. It seems they are the same kind of paintings as those of the Brandberg Mountain where the White Lady is (refer to my trip to Namibia in 2010).

Then it was time to go have a view of Cecil John Rhodes' grave and see what he found so beautiful. Those round bald heads (Matobo) are really an amazing sight and the view from what CJR called World's View is truly gorgeous. We climbed on one of the boulders, and Luis climbed on another one, which never was climbed during the two guides' guiding career. But Luis is a climber and likes to open new routes. 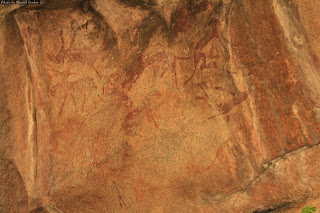 Then some more cave paintings, a small museum and a small climb to another view. I think it was called Whale Mountain, because of its whalish shape.

The picnic took place at a beautiful spot next to a dam. We ate our sandwiches while some fish river eagles circled above us.

The game drive we did was quite nice because of its scenery, but we barely saw any animals. Only a couple of impalas, zebras and hippos. But with Luis we mainly were there for the scenery of the Matobo's.
established by chmger at 11:50