When I sent word to Katryn that I would be glad to accept her invitation to visit her and Nelri in South Africa, she told me that her daughter (Nelri) was going to start a field guide or nature guide course in a short time. She asked me if I wanted to join and after some considerations (course contents, price, etc.) I accepted. Finally Katryn joined in the fun, so we're now all doing it.


When I arrived in Hoedspruit, Katryn and Nelri brought me to the person who would be our instructor to discuss the matter and see if I would do the course. I told him I probably wouldn't do the exam because I most probably would never use the certificate. Moreover, to use it you need to do a one week rifle course first. Which could be quite interesting, but for another time. He accepted, but said he would throw me out if I slowed the two other guys too much. The course contents is quite intense and there is a lot of information to know.

We started with a few lectures and short walks in the bush to get to know some trees. Our instructor, Marius, walked, showed us a tree, explained it to us (its medicinal use if any, how locals use it, etc.) and moved on to the next. This made it quite difficult for me and Nelri to get to know them properly because we had trouble putting them into our heads with all these informations on top. I never did any tree identification before and neither did Nelri, but for me it was even worse because none of the trees grow in Switzerland.


Marius told us quite a few times that South Africa got a lot more diversity in flora and fauna than most other countries. We have to know 12 trees by name and latin name and know their traditional use and medicinal use, then about 50 trees by name. Bu there are a lot more trees than that. Those are just the most common ones. And that's just for the trees... imagine, we have 16 subjects:
So imagine to learn a whole lot of things, theoretically and practically and learn them all in a few weeks for basically the "fun" of it. But after a week-end, I changed my mind, thinking it to be a good idea to do the exam anyway. It's always nice to get a certificate which shows you've achieved something.


Then we went out to ThornyBush private game reserve (you've probably already seen the pictures on picasa) and did 2 game drives a day, one around 6.30 in the morning and one starting around 3 or 4 in the afternoon until around 7. We saw all the big 5 (black rhino, buffalo, lion, leopard and cheetah) and many more animals. It is different than in Kruger Park or any national park insofar as the owners define their rules. One is that you can drive off-roads into the bush to get closer to the animals, which brought us to some really amazing encounters with elephants, lions, rhinos, cheetahs and leopard. 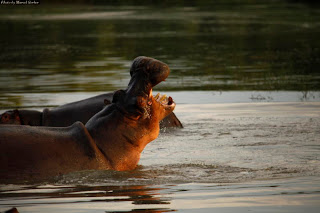 One day we saw this elephant eating a bush and we drove close to him to watch him. He would move slightly away but we drove around so that we could have a better view of him. After a while of taking pictures and just watching, we left him alone. We went a little bit further and as the sun was going to set soon, prepared for our sundowner. We took out the drinks, got out of the car, and started enjoying the sunset. A little while later we heard a cracking noise, and who do we see coming out of the trees in a leisurely pace ? Mister Elephant we saw earlier. We were a few meters away from the car, so the elephant must have seen that we were something different than just a green noisy and smelly thing. We prepared to make a run for it towards the car if there was going to be any trouble. But Mr Elephant just seemed to enjoy our company from a little further away.


During the 3 days I got discouraged again by the huge amount of things to learn and know well. Things which might be easy enough to learn if you've grown up in this environment and spent a lot of time outdoors. But not for a Swiss guy wanting to discover new things for fun. So I told Marius, that if possible I wanted to cancel the exam. So now I'm really doing it for the fun of it.


I've spent 2 days on Monwana lodge in ThornyBush clearing a place where there are a lot of dead branches from the terrible floods of the previous year, and doing other things a game ranger does on a lodge. Then I went to Hippo Pools which is a lodge where mostly South Africans go currently. The upgrade is not finished and the manager wants to be 100% ready for the overseas market when he starts advertising to it. There I helped with the mowing of the grass, the cleaning of the pool, the management of sprinklers, and so on. One afternoon we had a customer for a quad bike trip. So I had my first quad bike run ever. Quite cool! The girl from Sweden is quite adventurous, and the advertised 1 hour tour was a bit shorter because we didn't drive particularly slowly.


I was getting bored of sitting around on the game farm, even though taking a walk a watch zebras, impalas, girafes, kudus, and so on is quite cool. It's getting boring when it's the only activity of the day. So I decided to leave soon. It coincided well with the arrival of Katryn's aunt who's visiting her until she was to leave back to UK a month later. The study books had still not arrived, and Marius seemed to be preoccupied by other matters as he didn't respond to Katryn too much. This is how I decided to leave rapidly.
My next travels took me back to Johannesburg and from there I would be bound northwards, probably to Botswana, Zimbabwe, Zambia and so on.
established by chmger at 04:36