By train from Victoria Falls to Bulawayo


On my last day in Victoria Falls, I went to the train station in the morning. It wasn't early, around 10 maybe. I wanted to buy a first class ticket to Bulawayo, and ended up with a second class ticket. My mistake for being lazy. But for my defense, I had to say goodbye to Claire whom I hung out with for a few days. She flew out to Windhoek (instead of taking the bus). So I had my second class ticket which cost me USD 10 instead of the USD 12 for the first class.

After that I had until 7 in the evening to take full advantage of the day. So I walked down to the bridge where I watched a lady bungee quickly. As I did all that in December 2010, I did not feel it necessary to repeat this quite expensive activity. After that I went back to Shoestring where I spent the rest of my day. I read, played pool and ate a burger before leaving for the train station. A guy from the backpackers brought me over to there around 6.

Someone told me the train waiting was the one for Bulawayo, and that I should get in. I looked for my wagon, and found my compartment in it. After a little while, another white guy was looking for something. I went out and asked him if he was going to take the train. He said yes, and that the station master still had to assign him a compartment. He drove second class like me, so it wasn't a surprise he ended up in my compartment. His name is Matthew and he is from Calgary in Canada. 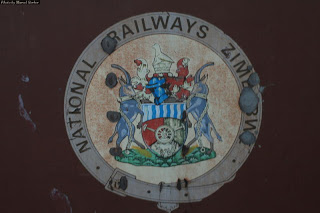 In the train we started talking and after a while, went looking for the bar which is in another wagon in a normal compartment where the guys had stocked up with cooler boxes full of cold drinks and beers. There was other stuff available, but we didn't ask what it was. Back to our compartment we started chatting with a few other passengers. One person was on his way to Bulawayo for the wedding of his “sister” (his niece) with his wife and child. Two guys from Harare were on their way back to their homes from a visit to the falls. They spent a day there and went back as their budget was quite limited.
After a second beer we went to sleep. I knew I shouldn't have traded my Perfect Pillow against some painting because now, for the first time since I carried it with me, I could actually use it. But as it was, the pillow was gone, and the bag slightly less bulky, and my neck slightly uncomfortable. I didn't sleep a lot.

The train was scheduled to leave Vic Falls at 7pm and arrive in Bulawayo at around 7 am. The first part of the schedule worked out quite well, but the second, for diverse reasons, just didn't. After many stops, probably unscheduled, we got to Bulawayo around 11 in the morning.

At the train station, two ladies handed over a flyer for their backpackers. The two were mother and daughter and were taking care to get customer to the family business. Instead of going back to Packer's Rest on 12th Ave, we were heading a little further out of town.
established by chmger at 07:12