With the last three weeks of traveling Zimbabwe still fresh in my mind, with names like Innocent, Privilege, Blessing, Pain, Talkmore and so on in my mind, with things seen, read and experienced, I can say full of emotions, that I still don't know what's happening around me. How did these people get by when a monthly salary couldn't buy a loaf of bread ? How did they keep their optimism, their friendliness and happiness ? Can you imagine Switzerland, or any European country, experiencing an exponential inflation like they've had here in Zimbabwe ? It might happen you say ? I don't think so, because we're “first world” countries where any other big power will step in and help us out of the worst. Whereas Zimbabwe didn't have anything valuable for the big powers to step in for. HIV is still a big problem in Zimbabwe, but people tend not to speak about it too much, or at least not in public. You can even get circumcised against HIV. If you think about it, it's not worse than South African President Jacob Zuma saying on national news that he took a shower after having sex with young girls to prevent himself from getting AIDS. Where is this going you say ? Why is this post called “Harare” you ask me? I don't know, I just wanted to summarize briefly before going away out of the country.

But everything you see from Europe about Zimbabwe is not true. The people here are very welcoming and very friendly, even if anything but nothing is free. Every service rendered costs a price. But then, why not? It's the same for everybody. 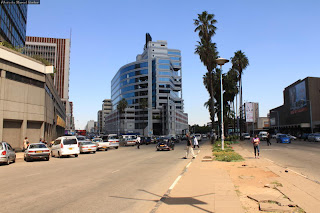 I'm drinking my beer in a room in an improved container outside a lodge in Harare, instead of being in a backpackers like and having a couple of beers with other backpackers. But who can blame me ? It's not like there were tons of backpackers in Zimbabwe, in fact, there's only a couple of them in the whole country. Of what I've seen, there's 2 in Vic Falls, 1 in Bulawayo, one in Masvingo and 1 in Harare. I haven't been to Gweru, but in any case, you can count maybe ten backpackers for the whole country.

As I've mentioned in previous posts, it's not a country where it's easy to travel on your own without a car. But let's start where I left off last time.

In Mutare I said goodbye to Marco and Claudia the evening before leaving, because they would only leave for Beira around 9 or 10. My plans were to be off in a bus driving towards Harare at 7.30 latest. So I woke up at 6.20, got ready, and wanted to leave, but no one was around to call me a taxi like promised. I waited a while, and then decided to start on foot and catch a taxi anywhere. Just then my promised help came out and called me a taxi that was here not 2 minutes later. The taxi drove me to the bus rank where I caught a coach with 5 people in a row instead of 4. It was a bit squeezy, but still ok. We got to Mbare in Harare about 4 to 5 hours later.

In Mbare I got a taxi to go to Westgate, which was quite difficult. A fellow helped me carry my bag and looking for one. We finally got one that brought people over to Mbare. I asked him to drive me to Westgate, and he said it would cost me USD 10. This I was ready to accept as Claudia & Marco had told me not to pay more than 15 I think (if I remember well). But the problem was, he didn't know where it is. But this I discovered only once we already were way on our way and through the city. So I took out my Lonely Planet and looked at the city map and found out we were at least in the right direction. I directed him further, but he still asked people (never trust a tourist with a map). We finally got there.

The following day I went out at 9 and took a minibus to town to go the Embassy of Malawi. I asked the operator, and at some point told me to go west on a road. From where we were, that was not the right direction. Luckily I took the Lonely Planet. At least its maps are still useful, even if half of the companies have moved since they printed it. So I walked a while to another main road, and took another combi towards the embassy. At the embassy I was served quickly, and was told I needed photos, which I actually knew (Claudia & Marco had told me) but had forgotten to take with. At least Avondale Shopping Center wasn't too far, and I was back with photos in less than an hour. Unfortunately the person responsible for accepting payments wasn't here, so I should come back later in the afternoon. I wasn't keen to come back again the same day, and was given instructions to come back around 8 the following morning to make the payment and receive the visa.

After that I went back to town and went looking for the best way to go to Malawi from Harare. I found out following:
So I chose the last option and later booked an intercape ticket from Harare to Lusaka for the 19th at 10 at night.

Then I went out to find a way to send back my souvenirs, and learned that DHL only had an express service and that it was obviously to expensive. Another operator was the same. So I just bought a box and will send the package in a day or two when I got everything together over the normal post office.

Like every time I arrive in a new city full of people, I dread the moment I have to step out of the relative safety of the bus or coach into the streets full of thugs, robbers and murderers (haha). You have to be aware that where the bus and coaches stop, are mostly mugging zones. People get their bags snatched away. But if you're careful to keep everything under your control, you should be fine. Don't take a picture in these moments that can be confusing if there's a lot of people, which is mostly what happens. Between the ones getting of the bus, the ones getting on, the ones selling stuff and the people that are around for any given reason. I'd have loved to take a picture of Mbare when I got of, and capture the essence of the moment. But that's not possible anyway. Mbare is so different to the rest of the city and its suburbs (at least those i've visited). 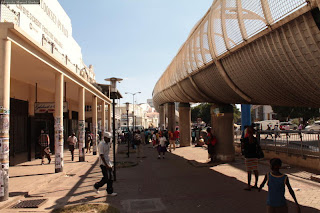 So to come back to the initial subject (don't ask me what it was, I don't know), I will just add that it has been a great pleasure traveling for three weeks in this awesome country. The roads could improve a tad, the roadblocks could get less, the tourism industry better, but hey, it's only starting off again. In ten years' time, this place will be busy.

If you want some authentic African Experience, try Zimbabwe with its awesome people. They're always up for a chat and a lot will want some money from you in some way for some service. But they don't hassle the tourists, they don't hate the tourists, they are just a little perplexed at what we are doing here as Zimbabweans mostly travel to visit relatives and friends. They usually don't visit places and sights. Although they should, and I've met a few who did. Be aware of muggers who are swift, I experienced this first hand this day. I felt a tugging on my daypack and when I checked the bag, the small pocket was open, and the stupidly placed phones were gone. I guess I am lucky I haven't been mugged when I had wallet and passport in there.
established by chmger at 17:06