In the Intercape luxury coach from Harare to Lusaka I met Sam the tour guide who was going to get a six month contract for walking safaris somewhere in Zambia, Resh* the Indian guy working for an international company and Thomas* the German guy working for the same international company for about 6 months. Thomas was still in his studies as a lawyer, and was doing a practical for the time being. It was a night bus leaving around 10pm so we didn't talk much then. When we got to the border around 4 am, we had, once again, to wait for the post to open at 6. I barely slept on the bus, and I couldn't sleep while waiting at the post. Inside was uncomfortable and outside was a bit cold.

Just before 6 Sam came to me and told me they sold coffee at the bar at the gates, so we went and I bought a cup of tea. I quickly swallowed half of the scalding hot cup of tea because the coach was ready to drive into the border aera.

We then all jumped back into the bus and we crossed the Zambezi, which struck me as odd as we didn't leave Zimbabwe yet. But the border post was a new one, and both countries used the same building. Smart and easy. It had been opened in 2009 by Cde President R. G. Mugabe. The queue was long and started way out of the building. But it was relatively quick, as all the officer had to do was to quickly look at people's passport and put a stamp in them. After that, we had to queue again on the other side, for the Zam immigration. Again the queue started way outside, and was quite slow. After waiting for quite a while, I saw Thomas going to a teller and leaving the teller, go around and behind them towards an office. I thought this must have to do either with his tourist visa he had to make, or with the fact that he was working. Not knowing I waited in the queue, and as it finally was my turn, I too, was sent to that office. Waiting all that time for just being told that I had to go to another office without queue was a bit stupid, because it made all the other passengers wait for us until we finally got our visas.

In the office I saw Thomas again who was in discussion with the officer and got out a little green book which was his temporary working permit. He didn't take it out at first, because he wanted to tour Zambia and get a normal tourist visa for a while. The officer had already filled out and stuck the visa sticker into Thomas' passport, but as he saw all the other entry and exit stamps, he wouldn't have it that way. He said they could sort me out first, and then discuss a win-win deal without me in the office. By then I had filled out my immigration form and was ready to get my visa. While preparing my visa, he still talked to Thomas and discussed the options. He finally stuck the visa sticker into my passport in a way that the corners overlapped and he had to fold them around the page. At that moment, a person came to the office looking for us because we were the last ones from the coach. He asked me if I was done, and I said I was, although I hadn't paid my visa yet. We left the office, and went outside where my bag was waiting. It had to be searched. I just opened it quickly and without removing anything, the searching officer felt around my things a little bit. I closed it again after a few seconds. I realized I didn't know how long I was allowed to stay in Zambia and told my helper so. So we went back to the office. I thought I would have to pay for the visa, but the officer just showed me the stamp on another page. It was actually the first time a country put the effective time I had asked at entry instead of the maximum allowed time. So I got 3 weeks instead of a month. It would be enough anyway.

We then walked back to the search unit where I quickly opened my laptop backpack and then showed my brand new unpaid visa to the officer at the gate. Nobody would know I didn't pay, as the fee of USD 50 was written on the visa and all the stamps were in the passport. We walked over to the bus where the helper asked me to give him something for a drink. I gave him my last one dollar bill. I only had a one hundred dollar bill left in the wallet now. Another bloke came and asked me for something, but as I had nothing I told him so. He didn't believe me and pulled a face when I asked him what he thought I should be giving him. I wasn't going to take out the 100 dollar bill.

When I climbed into the coach and the driver was starting the engine and about to leave, but I told them that Thomas was still waiting for his visa. So we waited. His friend Resh was through and waiting in the bus. My helper wanted me to go and look, but what could I do in any case? Nothing. After a few minutes, Thomas came to the bus and asked me if I could lend him USD 150. He told me he needed USD 800 and already had collected what he and Resh had together. He told me Resh would pay me back in Lusaka when we got there if he didn't make it and had to go back to Harare. I was a little unsure about lending money to the first person met in a random bus, but as his friend and colleague was going to be on the bus, I agreed. I took out my reserve US Dollars and gave him the USD 150. After another little while he came back and told us the new visa was in the process, but that it would take some time for it to be ready. He told us we should leave without him. On the way to Lusaka I changed seat and went to sit next to Resh who told me he was working in Zambia for about a year before going back to India. He's got family in India.

When we got to Lusaka we got out at a petrol station before the official intercity bus station with Resh. He negotiated for a taxi fare with a driver, and then told me I could get in. We drove in silence for most of the way, being so tired from the sleepless bus drive. The traffic was heavy and we got on very slowly. At their office, we waited a while and after a couple of minutes, Thomas arrived. He told us he only had to wait for about 5 minutes before he could come into Zambia. He hired a taxi and drove to the bus station where he learned we had left the coach earlier. He then took another taxi to the office.
He gave me back my US dollar notes that he finally didn't use, and invited me to lunch on the company's account. This struck me as a bit odd, him being a student. But then he started explaining his situation. 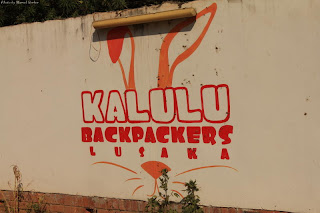 His job at the international company is to restructure the branches that are falling apart because of mismanagement. He goes to the country in question, fires all the incompetent staff, rebuilds the business, and hires new staff if needed. He was doing that in the Lusaka branch office and has already been here for 7 months or so. When he first arrived, he got a temporary work permit of one month. Resh quickly upgraded that to another kind of temporary work permit of six months (the green book). When his visa expired, they made a trip to Zimbabwe and planned to come back in with a tourist visa as they wouldn't need much time anymore. There were no other options, as the work permit was not extensible and he wouldn't be able to enter Zambia again for a year if he wanted to be officially working. His job wasn't finished though, so he came up with the story of a student who was helpless and lost. He finally managed to get a last visa for a week. Otherwise he would have had to go back to Harare with a “rejected” stamp in his passport, and his passport would have been blacklisted. With his position and his many travels, that doesn't sound to be a good idea.

After lunch at the best Indian restaurant in town, they drove me to Kalulu backpackers where I would be staying for two nights. The two of them would have a long week now, because they would have to finish the job, and find a new manager in less than a week.