The Bvumba Mountains or a Failed Attempt at Camping


In Mutare I tried getting useful information for transport and accommodation to and and in the Bvumba Mountains. The Lonely Planet is definitely out of date on the Zim chapter, and the tourist information center wasn't much more up to date with its old phone numbers. Mostly there were old prices that are totally incorrect or falsely indicated in USD as they probably were Zim Dollars and the phone numbers were old land lines not so much in use anymore. Moreover, the landlines are of a poor quality.

Everybody use mobile phones nowadays. From the tourist information office I was sent to the National Parks Department office where they gave me following informations:
This is how my decision to go camping got taken. The next step was to find a cheap tent that I could leave without too many regrets after having visited the Bvumba Mountains and Nyanga NP. I went into three shops where they sold tents. In the first one they had run out of the 2 people tents. In the second there was one that cost USD 140, definitely too expensive. And in the third one, they had a tent, but unfortunately, the poles were missing. I got directed to Mutare Mart where they sell Chinese products. There I found a very small four people tent without rain protection for USD 45. I did the same other shops in the other direction to find a sleeping mat, and found an exposition model that I got for USD 30 instead of 45 in the last shop. USD 77 later I was equipped with tent and sleeping mat and went to buy some supplies to last me a few days in the mountains. Or so I thought, although I had heard it would be cold up there, especially at night.

At some market shacks in the street I bought 4 medium sized butternut pumpkins, a pack of tomatoes and two big avocados for USD 5. In the supermarket I bought some rice, curry and bread. I hoped there would be some cooking facilities at the campsite.

All the while I considered my two jerseys and my light sleeping bag and thought this would end up with me freezing to death in some country in Africa.

After that I took a taxi back to the guesthouse and asked him if he could take me out to the place where the taxis leave for the Bvumba Mountains the following morning at 8. I prepared and left a bag with most of my technological stuff and a bag of laundry for storage at the guesthouse fearing the laptop might not survive a rainfall or a misty night in my “roofless” tent. The laundry was to be washed during my “holiday” in the mountains.

The taxi took my out to were another taxi would drive us to the Bvumbas. We just had to wait until it was full and the two remaining seats – out of 4 passenger seats – to be taken. It didn't take long and we were off. The taxi was an old boxy car with a large flat boot space. It didn't have any suspensions anymore and most of its innards had been tore out long ago. After a while of driving, I asked the driver if he knew of any campground from where I could go hiking. He said he would bring me to the National Park. I paid the man USD 5 for having driven me up there and then down a side-road to where the National Park's office are. I probably could have dropped the price a little, but I didn't really care. I was more anxious about the coming stay in the mountains. So far the weather was still sunny and the temperature quite hot. I knew the night would get cold, as even in the lower laying Mutare, it was quite cold at night.

Victor, one of the NP officers, the water was currently out, but that it would be running again in the afternoon. It was only about 10 in the morning and I had ample time to set up my camp. He told me I could come up to the office a little later as they were currently having a staff meeting. I had only brought one bottle of water thinking that in Mutare the tap water was drinkable and that I thus should be able to drink the tap water up in the mountains. But Victor said I would have to boil it first. There were no cooking facilities but he could probably arrange some pots for me to use. 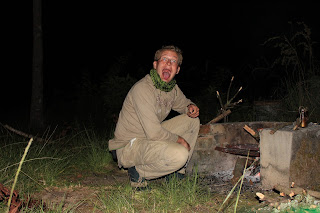 I put up my cheap “roofless” Chinese tent at the campsite from where I would be overlooking Mozambique. I never bought anything Chinese before because I had heard so many bad things about how the Chinese wares would wear out after having used them once or twice only. The tent seams were already showing weakness and the quality of the fabrics used was really low. But that was to be expected for a tent I would only use a few times. What wasn't to be expected was that the sleeping mat, when properly inflated, was defect and showed a bulge at one end, like a pillow, but very much uncomfortable.

Some Samango monkeys were adding a touch of exotism to a place that otherwise looked like it could have been in Europe.

The whole thing reminded me slightly of “Into the wilds” when the guy went to Alaska on his own, although I was quite luckily very close to some infrastructure, and help, if needed. I wasn't equipped, physically and mentally, to go out on my own to some faraway wilds anyways.

I sat there for some time, reading a bit, and considering what to do next. I didn't sleep well the previous night and I felt really tired. A butterfly came to sit on my shin for a while during this time of contemplation. After some time I decided to see whether I was still able to build a fire. I didn't find the leaves that burn well straightaway so I used some of my whiskey, and managed to get a fire going. I used the leaves to relight the fire in the evening.

After that I took a nap with the fire safely burning in the fireplace. When I woke up I decided to go check out the botanical gardens and spent an hour walking around these English-style gardens. In the evening I restarted my fire and built myself a system to hang a can of beer with water over the fire. But it never boiled unless the can actually was on the embers. Having no cooking tools I made myself a wooden spoon and cooked half of a butternut by putting it naked in the embers. I ate some toasted bread with avocado and later a halfway cooked butternut.

I watched the stars and the lights of what I thought should be the Mozambican border town of Chimoyo. Having nothing else to do, I went to my tent, read a while and went to sleep.

At around 3 or 4 am I woke up feeling cold so I put on my second jersey over the first one. It wasn't enough and after a while felt cold again. I tried to get another fire going, but neither leaves nor whiskey would light the now cold and wet fuel. So I gave up and tried to go to sleep again. I managed to sleep a little a while later before the sun got up until about 7 when the sun fully hit the tent and dried it up in minutes. It was getting hot, so I went out.

I decided that spending another sleepless night in the mountains would be pointless as I wouldn't be fit to go hiking anyway. So I had Victor call the driver who brought me up the previous day, and he came a while later and even had to wait for me to finish packing. It naturally didn't please the other passengers too much. I really wasn't equipped to go camping in the cold like this.

I came back to the guesthouse in Mutare and felt even more tired than the previous day.

The following day, before going to the Bvumbas again with Claudia and Marco, I had managed to bring back the defect sleeping mat and the cheap Chinese tent to the shops and get full refunds. In a way, I used camping equipment for free for a night.
established by chmger at 08:44