The following day I didn't see Eve and Andrea until evening because they left quite early. I started the day with laundry and then had some toasts with honey and tea for breakfast. I spent most of the day at the backpackers taking care of the laundry, lounging by the pool reading and playing ball with the English people who had come along for the football game the previous day. They even had me play some cricket for 5 minutes in the small compound. Around six thirty in the evening I saw Mitra, Eve and Andrea who were back from their Chobe day trip. They saw a lot of elephants, a lion, hippos, crocs, a rhino or two (if I remember well) and so on. We then all went to Cafe Zambezi for dinner. It's not the cheapest place, but they usually play salsa music and have good food. They have a mix of local and Caribbean dishes interspersed with classic western culture meals. They have salsa classes there on Tuesdays and Thursdays, in which Torsten takes part. When we got back to the backpackers our now almost “traditional” cuddling session followed. Mitra took part as well and we chatted for quite a while. The girls were planning to go to the falls the next day, and invited Mitra and me to join them.

That is how we ended up all going to Victoria Falls. Andrea had never been to Africa before, so it was her first visit to the Falls. Mitra had been there on a full moon visit and Eve had visited previously with her family here in Zambia. You all know I have now been there multiple times on multiple sides in multiple seasons. It's always good to go back and experience it one more time. I would have gone more if the entry fee wasn't that high (USD 20 in Zambia and USD 30 in Zimbabwe). At least the 11 kms ride to the park entry was free because we took the 10 am Jollyboys shuttle which runs every day. I had managed to spend most of the cash I had taken out of the ATM at the restaurant so I didn't actually have enough cash for the entry fee. Eve paid for me and we took a picture before getting all soaked.

I didn't remember the layout of the falls on this side. I had completely forgotten that there was a bridge crossing between to points. Last time I came to this side, the whole wall was dry and there were only a few tiny water streams going down at some points. The main water could be seen from afar on the Zim side. But now the roar and thunder of the Zambian falls was tremendous and covered all sounds. The water rained up, down and sideways and we got soaked quickly. The paths are slippery because of the algae that grow during the rainy season. The water level should slowly drop again from now on. We crossed over the walking bridge which was more like a river. The girls sang all the rain songs they could remember at the top of their lungs during our visit. We had quite a lot of fun, even though the temperature wasn't really warm yet. Winter was approaching, and you could feel it by the chillness of the nights.

After that we went to the top of the falls, where I previously had walked right at the edge of the drop. Now there was so much water you would be dead meat if you tried it. Most probably your body would never be found by humans, but by crocodiles in the lower Zambezi where the water is calmer. We ate our sandwiches we had prepared before leaving and got warm and dry in the sun. The sun stroke hard and hot.

We then decided we had to walk down to the Boiling Pot. The path down there is quite steep, but when the rafting season is going, they manage to carry down all the boats and other equipment without problem. A troop of baboons watched us walking down, scrutinizing our bags closely to check them out for food. Some of them were quite big and unafraid of humans. They sat on the path where we had to go around them. Their strength is much more than ours, and they could break us in pieces quite easily. But we managed to get through without any problem. The walk down was gorgeous and the view on the bridge amazing. Arriving at the Boiling Pot, the water was quite high and we sat down on boulders at its edge. At some point I needed to cool down (now it was getting hot) and sat on the ledge from where they launch the rafting boats taking care not to be washed away by the swell. Walking back up was a tad slower and we had to stop midways for the girls to rest before reaching the top. There was a bench where we sat a while and watched the view. 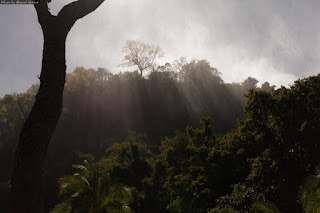 It was then almost time to go for High Tea (again) at Royal Livingstone Hotel. It's located a couple of hundred meters before the falls on the Zambezi. I was doing a lot of British activities lately. I already had High Tea (my first time ever) with some British people in Victoria Falls Hotel in Zimbabwe about a month earlier. In any case, we walked to the hotel gates, where they let us pass even though we were not in a car (obviously). They said to pay attention to the wildlife, as the hotel compounds serve as private game reserve. Not far from the gates, we stumbled upon a small giraffe.

At the hotel we had to wait a while until High Tea was ready. They were setting up a buffet and gave us a menu with the list of teas. The desserts looked really amazing and we tried from everything. The one chocolate cake was really good, but not as good as the Solid Whiskey Chocolate Cake from the Bvumba Mountains. I was disappointed getting the only green tea that was served with a Twinings tea bag instead of leaves like the others. But in general it the food was much better than the one in Vic Falls Hotel.

After spending quite some time eating and drinking our teas, we paid our dues (or better, Eve paid mine) and we ordered a taxi from the reception. The hotel could provide us with a lift to town that would “only” cost us KR 75. But the lady called a taxi that picked us up and it cost us “only” KR 50. A shared taxi would normally contain 4 passengers and would cost KR 6 each (KR 24 total) but we would have had to get that from the taxi rank. But Mitra had to get back to the backpackers to get ready for his airport transfer. As we drove towards the exit, we spotted a dazzle of zebras which caused quite some excitement as Andrea hadn’t seen any zebras so far. Which is quite incredible, in a land usually so full of zebras.

That night we had some food from the kitchen at Jollyboys. I wasn't too happy about the chicken wrap which wasn't nearly as good as some food I had had at other places (and more expensive as well). Our next cuddle session followed after that, but without Mitra this time, who had managed to lose and recover his iPhone just before leaving.

The following morning, I woke up around 6 and got ready to take the seven thirty bus to Lusaka. I planned to meet the Oshivambo Germans at Kalulu backpackers the previous day, but then changed my plans when I met Eve and Andrea. It was their last day in Kalulu and we tried to start a party. They had partied quite hard the previous days and were quite exhausted. But anyway, we had drinks at Kalulu, they prepared a good meal and the evening went on well. We did silly things and had fun. Eve texted me she had had two, and later three drinks and that she was feeling drunk. At 8 she said she was going to pass out and sleep. Unfortunately I missed that part. We went out to a dancing bar where Eva (German Eva, not Eve) started feeling unwell so that Jeanine had to bring her back to Kalulu. Franziska and Martin disappeared as well and we somehow ended up being 3 guys left in the dancing bar. We drank another beer and called it a night.

The following morning, the Germans who all called me “Schweizer” were a bit late getting out of their rooms. They then left for a 20 hours bus ride to the northern parts of Zambia, from where they would eventually cross over to Malawi. I plan to go to Malawi from Lusaka to Chipata the border town, and on to Lilongwe. My path drives me in a mostly northerly direction trying not to get trapped south by a Zambian or Mozambican border. Visa fees always apply if you want to go to these countries.

I spent the rest of the day chatting with Marc, who is from South Africa, and traveling all around the place with meager savings. He is an English teacher and also a kid entertainer. He's been staying for quite a while in Kalulu. I had already met him during my first stay in Lusaka. I didn't need to provide anything else than the days food, so I chilled and relaxed. In the evening we went to the Indian restaurant with Tim the American from LA (Burbank) and Jan the German who just arrived and will be starting a practical of six months in the Western Provinces.
established by chmger at 11:48