From Bangkok to Siem Reap

To enter Vietnam overland, I found out on Internet, that it was better to have a visa before getting to the border. So during my stay in Bangkok, I decided to go the Embassy of the Socialist Republic of Vietnam to apply for a visa. On Internet I also found a government website where you could buy apply and pay for your visa. But it said it's only for air travelers. The price mentioned, was something like USD 45 for the visa, and USD 17 for the letter of approval, totaling USD 62. But at the embassy, wanting to pay USD 62 in US Dollars, they told me I had to pay 2'500 Baht (about USD 80). So I went to change my USD to Baht at a nearby bank.


Back at the embassy, I met Chase. He also applied for a tourist visa and we chatted a bit about our plans. As we were planning to leave on the same day, we decided to go together. It's always better to travel with other people. It gives you a travel companion, and also it reduces prices somewhat when you share taxis or tuk-tuks. We were talking about a train from Bangkok to Saigon (Ho Chi Minh City today). But Cambodia, if it had trains running in the past, doesn't anymore.

The train left on time at 5.55 in the morning. It was only a third class train. So the seats weren't super comfortable, but comfortable enough for us to spend 6 or 7 hours in it. The advantage of the train compared to the bus, is that you can move around whenever you feel like it. We tried sleeping, although it was not meant for sleeping and was quite difficult to find a suitable position. I even managed to lose sensitivity in one of my legs at some point.


The train, with us inside, rattled along the flat and wet rice fields of South East Thailand.

We met two Germans on the train and we asked them if they wanted to share a tuk-tuk to the border with us. At first the drivers didn't want to take us all in one tuk-tuk. They wanted us to take two different tuk-tuks. And the price for one was to be 300 Baht, which was excessive. The German Tim, negotiated with fervor and got us an 100 Baht for four fare, which was good enough. So we crammed into that tuk-tuk and drove off to the border. The town of Aranyaprathet is about 6 km from the Thai - Cambodian border post of Poipet.

We were all quite hungry, but now we were off. 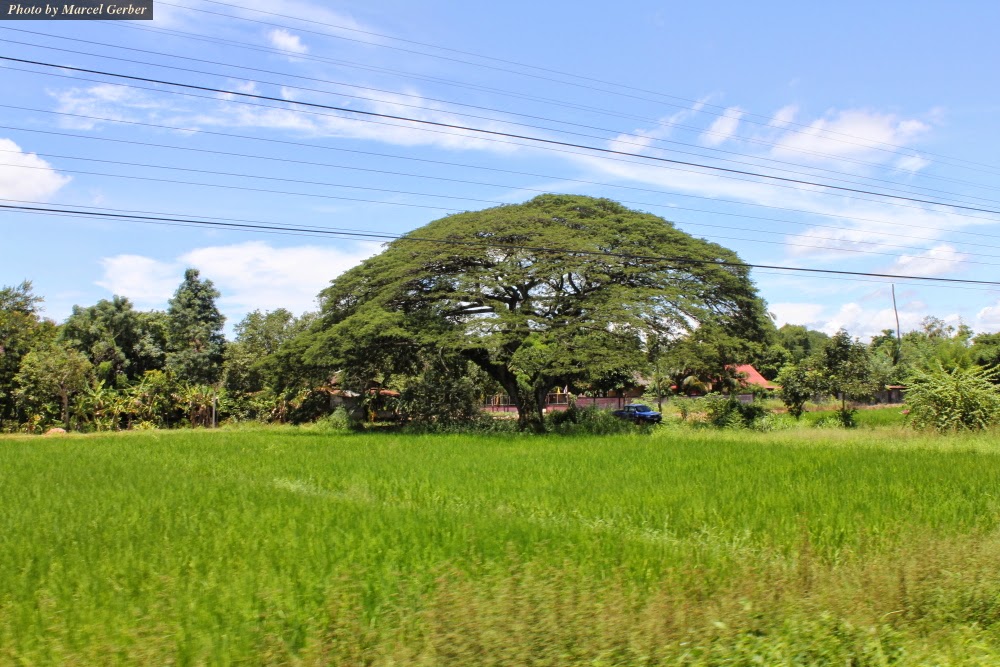 The tuk-tuk driver unloaded us in an enclosed area where the English writing read something like BORDER - VISAS. They wanted to prepare visas for tourists before they got into Cambodia. Just so they can get a fee. There is absolutely no need to do that. If you did not pass the official immigration border post of Thailand to exit the country, do not buy a visa for Cambodia. So far, it is possible to get visas at the border. Maybe not for all nationalities. Always be sure to check out the status before going anywhere close to any border. We were fully aware of all this, so we just walked on the the Thai immigration office to get stamped out. I had a little bump: they asked me if I was going to come back in the same day. I denied and I was let out.


On the Cambodian side, we were asked to fill out a visa application. As I still had my business visa, I just needed to get stamped in. So I waited for the other people to get their visas. Then we went to the Cambodian immigration office where we would get our picture taken, fingerprints stored and checked and passport stamped. The queue was long, and the temperature was quite high. Only a few fans worked at the end where we would finally get our stamps. Of the four queues in the fastest was 1, then 2 then 3 and finally 4. We all kind of ended up in number 3, which was really slow. I think the officer in place was really thorough.


After two hours, we were finally stamped into Cambodia. We went to eat at some small restaurant, had a beer and relaxed a bit. Then we took a taxi to Siem Reap. The price of USD 44 was agreed for all participants (four of us). It was not much more expensive than a bus, but much faster. About two hours later we arrived in Siem Reap.


In the end we all where shipped to Baphuon Villa, where I only stayed for one night. It was not really in my budget, but it was not expensive either. The house is an old style house with a nice decoration. It feels very warm and welcoming. The Scottish owner is also quite nice and talkative. You can also get breakfast for 2 or 3 dollars, but I was definitely going to leave too early for that.

Refer to Seat61.com for information on this part of the trip.